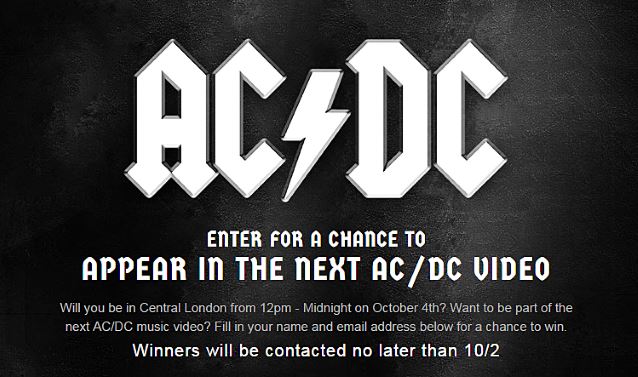 AC/DC will film a music video for an as-yet-undisclosed song off the band's new album, "Rock Or Bust", on October 4 in London, England.

Fan can enter for a chance to appear in the clip by filling out the form at sweeps.acdc.com. Winners will be contacted no later than October 2.

"Rock Or Bust" will be released on December 2. The 11-song collection is AC/DC's first since 2008's "Black Ice". Starting this Saturday (September 27), Turner Sports will preview a song from the album called "Play Ball" on TBS and other Turner media outlets for several weeks as part of its 2014 Major League Baseball Post-Season coverage. It's not clear whether "Play Ball" will also be sent to radio stations as the first single from the new CD.

A preview of "Play Ball" is available below.

AC/DC has also now made it official that founding guitarist Malcolm Young will not be returning to the group due to ill health. A statement issued by the group's Australian record label said, "Unfortunately due to the nature of Malcolm's illness, he will not be rejoining the band." His replacement is Stevie Young, the nephew of Malcolm and his brother and co-founder Angus Young.

Stevie played on the new album, which was recorded in Vancouver, Canada earlier this year. This is the first AC/DC album in the band's 40-year history on which Malcolm Young will not appear.

AC/DC will embark on a world tour to both promote "Rock Or Bust" and celebrate the band's 40th anniversary, although details are yet to be confirmed.

AC/DC drummer Phil Rudd recently shot down reports that the band was considering retirement in the wake of Malcolm's illness, saying, "Angus Young will never retire. We were never going to retire. It'll never happen. Angus will never retire and as long as Angus never retires, I won't fucking retire either."

Despite the loss of Malcolm, Rudd said that "everything's great in the band, we're ready to fire up on all cylinders again."