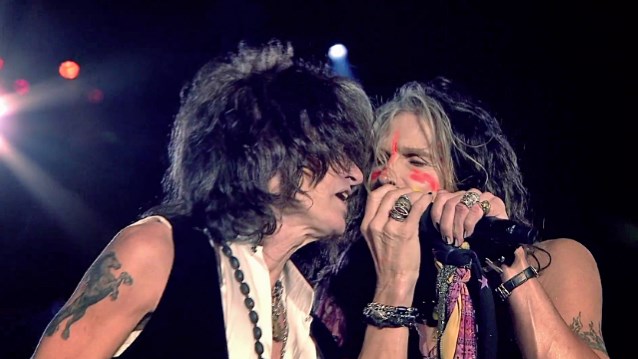 Fathom Events, Cinema 1 and Eagle Rock Entertainment are partnering to present a monthly "Classic Music Series", to be kicked off by legendary Rock And Roll Hall Of Famers AEROSMITH. Fans will be blown away by AEROSMITH on the big screen for a special one-night concert event on Thursday, February 26 at 7 p.m. local time. It was captured live at Donington Park in Leicestershire, UK, in June 2014 as part of the band's critically acclaimed 2014 "Let Rock Rule" definitive rock and roll event. Rock's most lethal army — Steven Tyler, Joe Perry, Joey Kramer, Tom Hamilton and Brad Whitford — rocked audiences in 16 countries with electrifying performances. The "Aerosmith Rocks Donington 2014" 19-song set list includes the band's iconic hits "Love In A Elevator", "Janie's Got A Gun", "Don't Wanna Miss A Thing", "Dude Looks Like A Lady", "Walk This Way", "Dream On", "Sweet Emotion" and many more.

A performance clip of the song "Mama Kin", taken from "Aerosmith Rocks Donington 2014", can be seen below.

Tickets for "Aerosmith Rocks Donington 2014" are available at participating theater box offices and online at www.FathomEvents.com. The event will be presented in more than 300 select movie theaters around the country through Fathom's Digital Broadcast Network.

For a complete list of theater locations visit the Fathom Events web site (theaters and participants are subject to change).

"It's always an absolute hoot that leaves me howling at the moon, performing at Donington we couldn't have had a better time on stage that night," says Steven Tyler. "I could feel the vibes of all the greats pulsing through the stage like AC/DC, RAGE AGAINST THE MACHINE, METALLICA and so many more."

"We have played Donington many times but this performance was one of our best," said Joe Perry. "Thanks to our fans who were there who helped us make it a night to remember. We are proud to have it be part of this theatrical series and it will give our fans who weren't there around the world a chance to relive an ass kicking night of rock and roll."

"We're really proud and grateful to have been chosen to headline the Download festival at Donington for 2014," Tom Hamilton says. "It was an awesome experience and I think this film captures it. Special thanks to the insane fans who stuck with us through mud and rain."

"AEROSMITH are rock legends and I am very proud Cinema 1 is a part of bringing this incredible band's live concert performance to theaters across America," said Ray Carolin, CEO of Cinema 1. "I am certain their fans are going to be blown away when they experience 'Aerosmith Rocks Donington 2014'."

The first event in the "Classic Music Series", "Aerosmith Rocks Donington 2014" will be followed monthly by a who's who of rock and pop which will be revealed shortly. Expected events include: a singer with a history of hits since the "50s face-to-face with a modern pop mega-star, the beloved progenitors of the jam band genre, one of the UK's greatest and most influential rock acts, a lauded guitar god and many, many more.

Fathom Events Vice President of Programming Kymberli Frueh-Owens said, "AEROSMITH fans won't 'wanna miss a thing' with 'Aerosmith Rocks Donington 2014'. Music aficionados across the nation have a year full of great tunes ahead of them as the 'Classic Music Series' is set to bring the best of the best to the big screen all throughout 2015."
For a list of theaters that will be showing the film and complete ticket information, visit Fathom's web site. 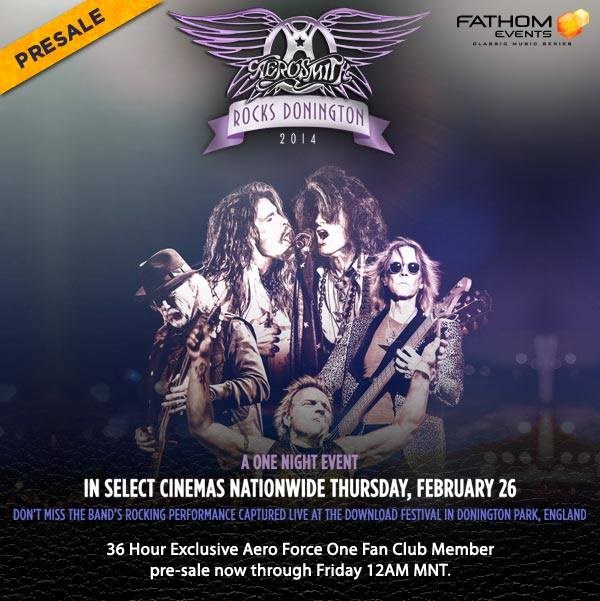