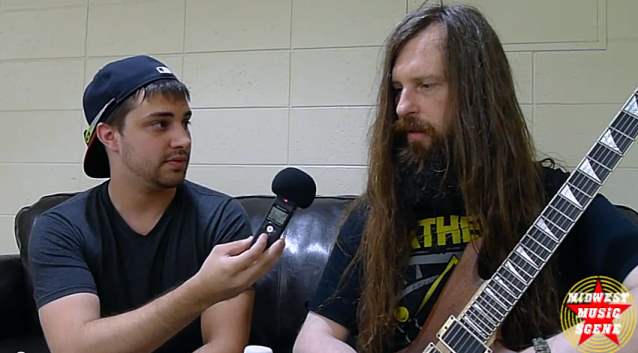 Midwest Music Scene conducted an interview with lead guitarist/songwriter Oli Herbert of Massachusetts metallers ALL THAT REMAINS before the band's August 31 performance at the at the Cox Business Center in Tulsa, Oklahoma as part of the Rock Allegiance Tour. You can now watch the chat below.

In conjunction with Record Store Day, ALL THAT REMAINS released a limited-edition vinyl version of their "The Fall Of Ideals" album (Razor & Tie). Available for the first time ever on vinyl, the LP is ALL THAT REMAINS' 2006 critically acclaimed metalcore classic. The album was produced by Adam Dutkiewicz (KILLSWITCH ENGAGE, UNDEROATH) and features 11 songs, including the hits "This Calling", "The Air I Breathe", "Six" and "Not Alone". The vinyl is pressed in a striking blue/black swirl color.

ALL THAT REMAINS continues to tour in support of its 2012 release, "A War You Cannot Win" (Razor & Tie).

ALL THAT REMAINS' "Stand Up" single spent three weeks at #1 at Active Rock Radio. This marked ALL THAT REMAINS' first -ever #1 radio single and the group's fifth consecutive Top 10 single at the format.