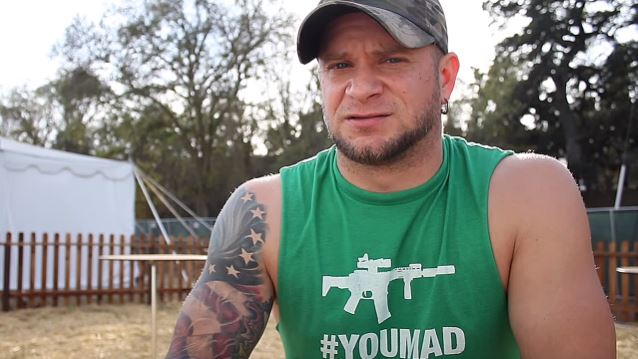 Music Junkie Press conducted an interview with ALL THAT REMAINS singer Phil Labonte at the Aftershock festival, which was held October 24-25 at the Gibson Ranch, just outside Sacramento, California. You can now watch the chat below. A couple of excerpts follow (transcribed by BLABBERMOUTH.NET).

On ALL THAT REMAINS's seventh album, "The Order Of Things", which came out in February via Razor & Tie:

"I know that it's currently my favorite. A lot of bands say, 'Oh, our newest record is my favorite.' I'm not that guy that's gonna bullshit people. I've caught some crap from people for telling the truth. But we're really proud of the record. It came out the way that we really hoped the record would come out. We really had an idea in our head that we wanted it to really spread the different styles that we like. Working with Josh Wilbur, who produced it… He was a new guy for us to work with; we'd never worked with him before. But he was great. He has really, really great instincts. His ear's really good. He came up with good ideas and stuff."

On recording vocals for "The Order Of Things":

"One of the things that Josh is really good about is getting you to kind of act. 'Cause that's kind of what singing is — it's performing, it's almost acting. You do something five or six times until you get the right kind of angst or the right kind of delivery and then be, like, 'All right. Cool.' And getting that out of someone… You don't wanna go ahead and lose yourself in the moment, but you definitely wanna be able to go ahead and connect with that kind of feeling."

On reaching new fans with each album:

"That's one of the things you have to do as a band. As people progress through life, especially if you're talking about younger people, as they get older, they get lives — they have kids, they get jobs, they can't go to shows as much 'cause they have to get up for work or whatever. So you always wanna be getting in front of new people and playing for people that have never heard you before. I'll tour with anyone. People have said, 'Who would you like to tour with?' I was, like, 'Who's gonna put the most butts in seats?'"

ALL THAT REMAINS recently parted ways with bassist Jeanne Sagan and replaced her with Aaron Patrick (BURY YOUR DEAD, DEVILDRIVER).

"The Order Of Things" followed up ALL THAT REMAINS's 2012 effort, "A War You Cannot Win", which featured the massive rock singles "What If I Was Nothing" and the chart-topping "Stand Up".