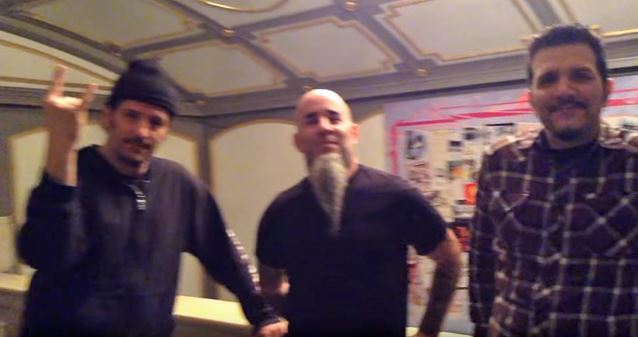 Piper of KidsInterviewBands.com conducted an interview with ANTHRAX on January 27 at the Newport Music Hall in Columbus, Ohio. You can now watch the chat below.

ANTHRAX's long-awaited new album, "For All Kings", is being released today (Friday, February 26) via Nuclear Blast in Europe and Megaforce in the U.S.

Beginning in the fall of 2014, ANTHRAX — Charlie Benante (drums), Scott Ian (rhythm guitar), Frank Bello (bass), Joey Belladonna (vocals), and lead guitarist Jon Donais — took their time in the studio recording the follow up to their Grammy-nominated, critically acclaimed 2011 album, "Worship Music". The band recorded some 20 original songs, almost twice as many as they had ever brought into the studio in the past.

Speaking about the ANTHRAX songwriting process on "For All Kings", Ian told Rolling Stone: "ANTHRAX songs don't happen until it's in the room really with Charlie, Frankie and me arranging material. But for Joey, we left a lot of room for him — even going back to 'Worship Music' — we felt we didn't need to be looking over his shoulder like we used to back in the eighties and the nineties. We used to all sit there and analyze and nitpick, and obviously things didn't work that way. So we decided to let Joey just work with Jay [Ruston, producer] and do his thing."

He continued: "No one else in the band has everybody hanging over his shoulder when he's doing his thing, so why should we all hang over Joey's? Obviously we had to become grownups to come to that decision. [laughs] So we sent template ideas of the songs to Joey — like, I've written lyrics that I shout down into my phone — but then we just leave it in Joey's hands. He's, like, the Superman of vocals. There's nothing he can't do, which I realized in the last five years. I certainly used to be a control freak and I'm not that person anymore in any shape or form, and Joey has certainly proved that he doesn't need anybody looking over his shoulder."

Benante told Yahoo! Music: "Joey's incredible on this record. He was great on the last one as well. It's amazing to have him back in the band, and there was a time I never thought that could happen. I'm happy that it did, and I'm also happy that we've learned from some of our past mistakes. Nowadays, I feel strongly about making quality records from front to back, and not being one of those bands who make records four songs deep and the rest is just filler to have something to go on tour with."

ANTHRAX's U.S. tour with LAMB OF GOD came to a close on February 12 in Los Angeles, California.