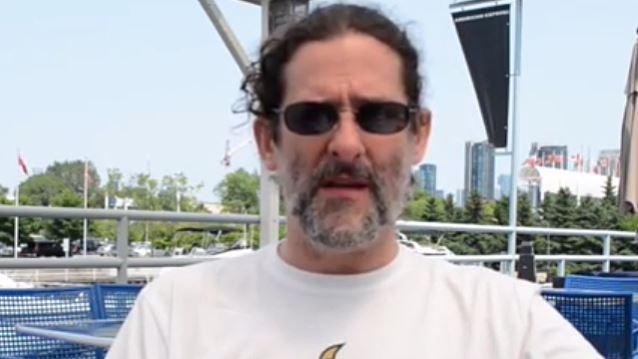 On July 25, Mike Bax of Lithium Magazine conducted an interview with drummer Paul Mazurkiewicz of Florida death metallers CANNIBAL CORPSE backstage at the Molson Canadian Amphitheatre, in Toronto, Ontario, Canada during this year's Rockstar Energy Drink Mayhem Festival. You can now watch the chat below.

CANNIBAL CORPSE will release its new album, "A Skeletal Domain", on September 16 via Metal Blade Records.

The CANNIBAL CORPSE collective — vocalist George "Corpsegrinder" Fisher, bassist Alex Webster, guitarists Pat O'Brien and Rob Barrett and drummer Paul Mazurkiewicz — approaches each recording session with a honed and precise vision of a band in their third decade of existence. With this new entry to their extensive catalog, they've switched gears, opting to work with producer Mark Lewis (THE BLACK DAHLIA MURDER, DEVILDRIVER) at Audiohammer Studios in Sanford, Florida, after having tracked their previous three outings ("Kill", "Evisceration Plague", "Torture") with Erik Rutan. Boasting twelve-ominous tracks in forty-four spine-fraying minutes, the result is a massive, belligerent, and deliberate aural attack that finds the band at their peak of their notoriously hyper-kinetic, meticulously executed brutality.

Preparation for "A Skeletal Domain" did not vary significantly from previous efforts. "At the end of the day, we're still making a death metal record, no matter where it's being recorded," relays Webster. Mark Lewis offered a slightly different, modern recording approach, but the band stressed that they could not be more pleased with their previous albums with Rutan, and the door is most definitely open to work with him again in the future. Changing producers is something the band has historically done after every few albums, if only to not get too comfortable. CANNIBAL CORPSE also tried to step outside of their comfort zone when it came to songwriting and their musical performances.

"Consistency is often confused with repetition. We are established with what we do as a band, and we could relax and not push ourselves, but we try to push the envelope. That's what makes this exciting," Webster adds. "Anyone who really listens to this album with an open mind will hear that it's not same-old same-old." Mark Lewis would concur with Webster's analysis and even goes a step further by claiming that "there are moments on this record that have never happened in musical history."

"A Skeletal Domain" track listing for the CD is as follows:

The song "Sadistic Embodiment" can be streamed below.

Regarding the musical direction of the new CANNIBAL CORPSE material, Webster told Metal Wani: "I think it's… a dark-sounding album. Which, you know, it's a death metal album, so, of course, it should be kind of dark and eerie sounding anyway, but I think this one a little more than normal. That was kind of the direction the songwriting went in. Pat [O'Brien, guitar] actually wrote a lot on this album. This will be the first album where Pat wrote more songs than anyone else. He's really been super motivated, and he's been writing some great, great material that we're all really excited about. And some of it, it's very evil-sounding stuff. So I think our fans will be very happy. There's nothing on here that's even a million miles close to being a sellout, you know what I mean?! It's definitely full-on evil death metal. I think everyone will enjoy it."