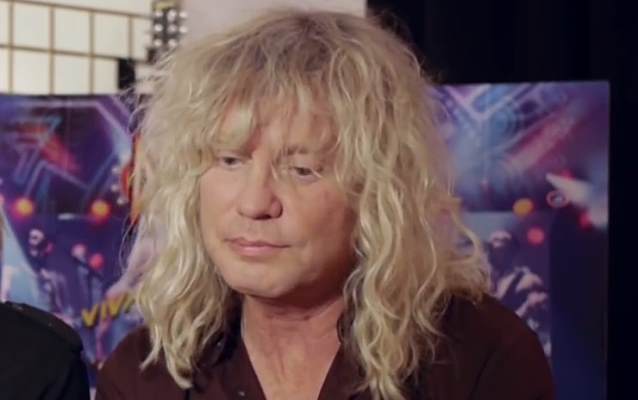 According to The Irish Times, DEF LEPPARD bassist Rick Savage is selling his Irish home for an advised minimum value (AMV) of €1.85 million (approximately $2.57 million). The musician and his wife, Paige, bought the house just over a year ago for €1.8 million and are said to be headling back to the U.K.

Winton Grove is "on 1.2 acres of enclosed and very private grounds, with a tennis court, woodland, a little stream, lawns and extensive decking. There are views of the Sugarloaf from the back deck, and across rolling fields, grazed by happy horses to the front.
Inside there’s a large hallway with a solid oak staircase that divides to bring you up to a wide landing, currently replete with gym equipment — so you can, if you're so inclined, train on a treadmill while dreaming of hill walking instead. To the right of this, the master suite is enormous, with three dressingrooms and an en suite. Opposite are two more bedrooms and a bathroom… In total, there is 501sq m (5,400sq ft) of living space."

Asked if being a rock star's wife all it is cracked up to be, Paige told RSVP in a 2013 interview: "It can be a pain in the ass. When Rick comes home, he is a husband; he does husband duties like any other husband, [and] there is no rock stars in our house. He does more than I do and I am more of a drama queen than he is; I am even lazier than he is. We just do normal things; you have to for your kids. There is madness in our house like in anyone's house; same crap, same school runs, same dinners."

In the same interview, Rick spoke about suffering from Bell's palsy, telling RSVP: "I had never heard of it when it happened, I thought it was a stroke. Literally, the whole side of my face was numb. I woke up one morning and knew that something was wrong, looked in the mirror and my whole face looked like it had melted. Almost 80 percent of people within two months make 100 percent recovery, back to normal. There is 20 percent where it never really goes away and it has never really gone away with me. It improves with time, it's just certain nerves are not connecting to certain muscle groups within your face. Consequently, I can't move my forehead. It looks like I have gotten bloody Botox years before it was invented. I took steroid tablets, but the best thing that helped me was acupuncture."