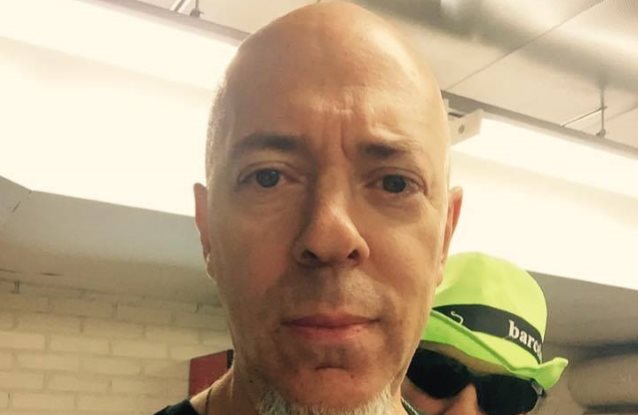 Australia's The Rockpit recently conducted an interview with DREAM THEATER keyboardist Jordan Rudess. A couple of excerpts from the chat follow below.

The Rockpit: How long did [DREAM THEATER's new album, "The Astonishing"] take, from the initial idea to the finishing of the record?

Jordan: Well, John Petrucci [guitar] wrote the story and he started to conceive the story about two and a half years ago, and then at the end of the last world tour, he presented me with the synopsis of it to see if it would be inspiring to write music to and I thought it was great. So we started to do that, so if you can consider that he started back then, that's how long.

The Rockpit: One of the things I noticed on this album is that your role on this album is quite prominent; there's a lot of keyboards and that kind of stuff that's more than the usual stuff that you've done. Was that something that was needed for this album?

Jordan: Well, because there's a real story, the approach was to treat it almost like a film score, for writing music for like a musical. So we needed to come up with all the different kinds of music which would help to kind of bring the story to life, which meant it had to be very dynamic and really call for a lot of different styles, including a lot of electronic bits and orchestral things so I think that's why. One of the things that we did right from the get-go was that John and I knew that we had to really focus in the compositional process, to do something a little differently than we ever done before. So we decided to just work together, we ran it by the band the idea that John and I would just go into the studio with the keyboards and guitars and really compose this music. So the process was different in the approach and just in the way we set up to do it. So, yeah, despite the nature of what it is, it kind of demanded a different output from us. What's interesting actually to complete that thought is that it's two hours and thirteen minutes worth of music and yet there is a lot of stylistic things that maybe are somewhat new but also there's a lot of prog and there's a lot of metal mixed in, just a big album.

The Rockpit: Mike Mangini is a phenomenal drummer. It's been a few years since he joined the band. So how has everything been so far?

Jordan: Well, Mike is a very unusual person in every way; he's very smart and very funny and he plays the drums like nobody else, and he's kind of on a different planet or something like that, both physically and mentally. What he does with his arms and his hands on the drums that nobody else can really figure out how to do. When you talk to him and check out his personality, it all becomes kind of one thing and you realize he's a straight-out-of-the-box kind of human being. But he's been great for DREAM THEATER because everybody is kind of unique in the band, but he is, in the drum/rhythm compartment, especially gifted so makes for a very cool element to our band.

Read the entire interview at The Rockpit.