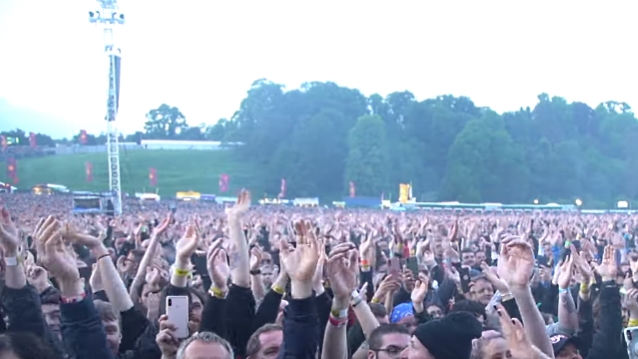 According to The Irish Sun, environmental group My Waste Ireland has expressed its dismay over the amount of plastic left behind by METALLICA fans following the band's concert Saturday night (June 8) at the iconic venue Slane Castle in Meath, Ireland.

My Waste Ireland tweeted out a couple of photos of a massive amount of plastic laying on the ground on World Oceans Day and wrote: "Were you at Slane last week?

"We were sent these images of the aftermath and are in shock.

"This needs to stop, a deposit refund scheme needs to be put in place at all large outdoor events. #MyWaste #MyImpact."

Around 75,000 fans attended the show, which marked METALLICA's first appearance in Ireland since the band played in Belfast in 2010 and Dublin in 2009. The legendary heavy metal act was unable to play in the country during the indoor leg of the "WorldWired" tour last year because of the size of its stage show.

According to Earth.com, Ireland has seen a 90 percent decline in plastic bag use since a tax was implemented.

As of January 2018, Ireland was the top producer of plastic waste in the European Union.

Statistics from Eurostat showed that Ireland produced 61 kilograms of plastic waste per person, per year.

Only two other countries produced plastic waste over 40 kilograms: Luxembourg (52 kilograms per person) and Estonia (46 kilograms).

Were you at Slane last week? We were sent these images of the aftermath and are in shock. This needs to stop, a deposit refund scheme needs to be put in place at all large outdoor events. #MyWaste #MyImpact pic.twitter.com/lRyuUBLtEN