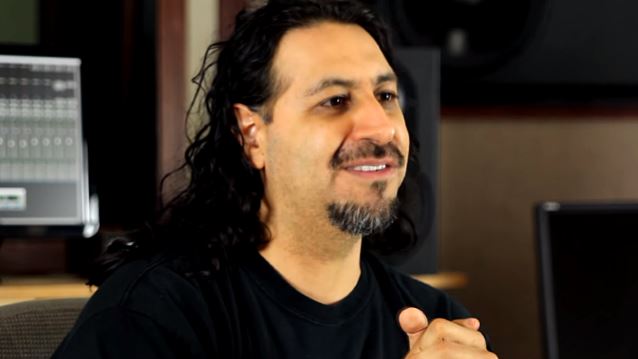 Metal Wani's William Richards and Sairaj Kamath conducted an interviw with former FEAR FACTORY drummer Raymond Herrera. You can now listen to the chat in the YouTube clip below.

Asked if he has heard the two FEAR FACTORY albums — 2010's "Mechanize" and 2012's "The Industrialist" — that were recorded after his departure from the band and what he thought of them, Herrera said: "I thought 'Mechanize' was really good, actually. I thought Gene [Hoglan] did a great job [playing drums on the record]. It was probably a little too thrashy for me, but for the most part, I think, from the interviews, it sounded like they were kind of trying to kind of recapture the 'Demanufacture' [1995] feeling, so I think they did a pretty good job doing that. ['The Industrialist'] I didn't like at all. I was really surprised that they used a drum machine [on the album], because I actually had thought about us doing that back when we did [2004's] 'Archetype'. I played around with the idea of possibily trying to record… or doing the album on a drum machine rather than me having to play it, but every time we did it, it came out really, really stale. Our demos were always with a drum machine, but it always sounded incredibly stale."

He continued: "I would have loved to hear Gene on that record ['The Industrialist']; I think it would have been way better… I was really surprised that they went down the drum-machine route, because, like I said, we tried to do that, like, 12 years ago, and it didn't sound very good. We were able to come up with a couple of workarounds, but at the end of the day, it just doesn't sound the same, it just doesn't feel the same. Unfortunately. I wish it did. 'Cause it would have a been a lot easier for me over the years than having to learn all the songs that I would program… I mean, originally, most of the FEAR FACTORY drum parts were programmed on a drum machine, then I had to learn them, then I had to play them live. So it would have been way easier for me to just program them and not have to learn them and not have to play them. So, yeah, they kind of cut a lot of corners doing that, and I think there's been a lot of backlash about it too.

"[Using a drum machine] makes it [lot] easier [during the] recording [process], 'cause you don't have to deal with setting up drums, getting drum sounds, your compressions, all your mics, you don't have to worry about editing… any of that stuff. So, I mean, it saves you a lot of time and a lot of money, but it doesn't sound very good, unfortunately. Like I said, I tried to do that a long time ago, so… As soon as you start to play a lot of the faster stuff… If you play really slow — like more 1-2 beats and more rock stuff — you can get away with doing it with a drum machine, 'cause it's not as noticeable. But if you start playing faster, it's very noticeable."

Asked if he can foresee himself and former FEAR FACTORY bassist Christian Olde Wolbers ever reuniting with FEAR FACTORY for a new album and tour, Raymond said: "I don't see that happening. I doubt it. I don't think it'll happen. I thnk there's too much… How can I say? There's too much water under that bridge. But who knows? I guess you can never say no, right?! But there are no plans to do that, that's for sure."

In a 2012 interview with ReGen Magazine FEAR FACTORY guitarist Dino Cazares defended the band's decision to embrace drum-machine technology completely on "The Industrialist". He said, "The songwriting process was much quicker, much more efficient, much more cost effective.

"Most people are saying, 'Them using drum programming is no different. It doesn't really sound any different.' You know what I mean?! They can expect it from a band like FEAR FACTORY. Again, it's very cost effective.

"The way music is going today, a lot of people don't make much money anymore, unless you're a big radio band or something like that. But for metal bands like us, we make most of our money just on touring and selling merchandise. And the record company is not giving much advances anymore. So you have to find ways to cut corners, financially, to try and save money. But this is nothing new for us, again, at the same time, 'cause when me and Burt [C. Bell, vocals] first did our first demo back in 1990, it was with a drum machine. . . So it's nothing new for us. We started that way. . . And then it wasn't until we met Rhys Fulber when we did the remix album, 'Fear Is The Mindkiller', which was in 1992, and that was when we were like, 'OK, Rhys can afford all this technology. Let's bring it in, let's embrace it, let's use it.' And ever since then, we've always gotten criticized for it. Because most metal fans, they just don't… At the time, back in 1992, it was not really well known in metal to do that kind of [stuff]… I'll put it this way: it wasn't really spoken about. I mean, bands have used other members and other stuff, samplers and stuff like that, to do certain things, but it was never talked about, they never brought it to anybody's attention. We embraced it and that has has kind of always been our concept."