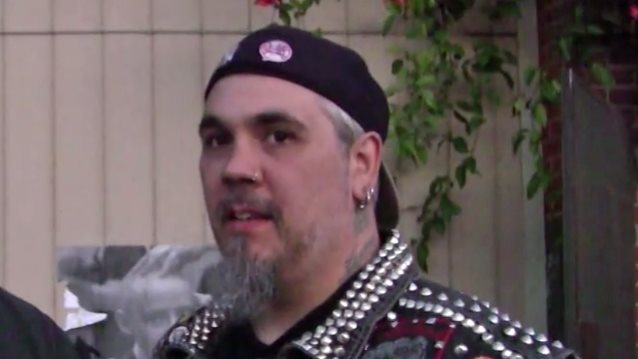 Former MACHINE HEAD drummer Chris Kontos has slammed Robb Flynn and Philip Anselmo in the aftermath of last week's incident when the ex-PANTERA singer made a "white power" gesture onstage at a concert.

Anselmo performed the PANTERA classic "Walk" at the January 22 "Dimebash" event at the Lucky Strike Live in Hollywood, California in honor of his former bandmate, late PANTERA guitarist "Dimebag" Darrell Abbott. As he left the stage, he made a Nazi-style salute. He appeared to say "white power" as he made the gesture, but he later claimed he was referring to drinking white wine as part of an "inside joke." Anselmo has since released a video message, saying that he "deserves completely" the "heat" that he has been getting over his actions and claiming to be "a thousand percent apologetic to anyone that took offense to what [he] said."

Several notable musicians have come out and criticized Anselmo for his actions, including Flynn, who uploaded an eleven-minute video response to the incident in which he called Anselmo a "big bully" and described Philip's behavior as "fucking wrong."

Now Kontos has stepped forward to offer his opinion on the matter, saying that both Flynn and Anselmo are "fucking dumbass self-centered blowhards" who "seem to be full of crap."

In a public post on his Facebook page, Kontos writes (slightly edited for clarity): "Sorry, Phil, but this is the end. I knew I saw this photo of you backstage with the white wine in your hands before you went on stage at Dimebash and processed to shout 'White Power' at the top of your shattered voice and gave the Nazi salute TWICE!. Your stupidity and racism once again has collided in your mouth and then into the world via your microphone. I knew I saw this picture with the wine...when I read your flippant and weak statement about how it was a joke about drinking white wine backstage I was fucking disgusted and dismayed at your stupidity on levels I have no words for. I bet you DID mean it as a joke...because you are flat-out dumb-as-a-stump racist, I bet this would be funny to you.

"There is the 'White Power Wine' right there in your hands. People are saying (Robb Flynn) that NO white wine was backstage at Dimebash...well, there it is. Not Beck's beer... I saw this photo the day of the show...and thought to myself how nice to see you and Rita [Haney, Dimebag's longtime girlfriend and one of the Dimebash organizers] toasting Dime ('the Pink beard in the sky,' as it said in the caption below it) before the show. Well, after seeing the vid clip of your dumb ass and then reading your statement, I remembered the photo. Still, you have to be crazy or just so out of touch with the world and are completely racist to think that a joke would be fun OR a way to honor Dime... or is there more to the story we just don't know about PANTERA and how the band really feels about racism?

"Then I watched Robb Flynn's response to the whole thing...and I must say he was well spoken and shared true feelings. He said that he had spoken with Phil that night and that Phil said to him 'I hated the 'n*gger era' of MACHINE HEAD...every minute of it...with that look' and Robb said that he laughed In Phil's face... really?

"Now, if Phil had said that shit to me before I was to go back him musically... no fucking way would I get on stage and perform with the guy. I'll tell you that much. Phil may be big and badass with his mits and all...but I would have had a fucking straightener with Phil right then and there, trust every bit of 6' 227 lbs of jiu-jitsu drum-crushing BMX smashing me on that... Bullies don't faze me...

"That brings me to this point... It also made me think about my post about the MACHINE HEAD stage dressing these days... and how Nuremberg Nazi Rally it really is.

"Words and imagery are very strong forces. The messages you send or speak make a huge impact on the world. I was not going to say anything, but then I felt a strong feeling of duty to make a statement as I have stood AGAINST racists and nationalist hate movements my whole adult life. These two guys leave me baffled as they both seem to be full of crap.

"I respect Robb for admitting using the word n*gger... but he is not thinking or maybe just too stupid himself to think about the truly anti-Semitic and Nazi messages his stage show sends to world and Jews as well as Holocaust survivors and their families. I find the whole thing very disturbing and I have to question why, if Robb knew about how Phil is and his views on race and the comments made before going on stage, then why he would still play up there.... Was playing with Dave [Grohl] and Robert [Trujillo] that big a deal that you would turn a blind eye to the fact you know this info and insight on Phil so you could get in on some kind of 'I'm big like these guys too' kind of thing?

"I think you are an opportunist and are full of shit.

"I think that we ALL do better when we all do BETTER in this life.

"So sorry but you both are fucking dumbass self-centered blowhards.... both of you have your foot in your mouth right now in my book."

Sorry Phil, but this is the end. I knew I saw this photo of you back stage with the white wine in your hands before you...