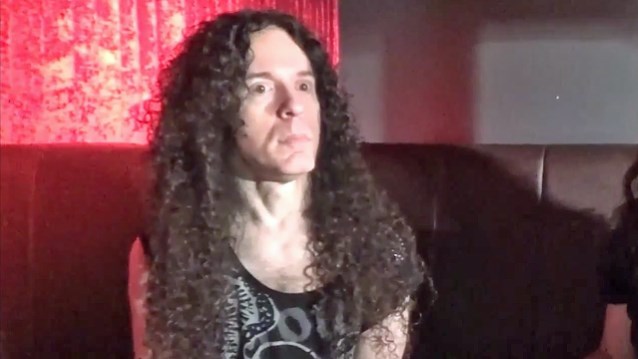 Impact metal channel conducted an interview with former MEGADETH guitarist Marty Friedman before his December 20, 2014 concert in Dublin, Ireland. You can now watch the chat below.

Asked if he had a favorite writer, Friedman responded: "Not really. Embarrassingly, I'm not very much of a reader, I'm not much of a book reader. I might have read ten books in my whole life. And it's very strange, because I'm extremely… I speak English very well, I have to tell you that. I speak with very good grammar. And even when I speak with bad grammar, it's on purpose, because I don't wanna sound like someone who speaks with perfect grammar all the time. But I'm kind of a 'grammar nazi,' which I hate that word, but… I could be a proofreader as a job. If I didn't play music, I could probably be a proofreader, which is strange for someone who doesn't read very many books. But I was just brought up in a very grammar-conscious, proper-English household."

Friedman also offered a glimpse of his views on religion, explaining: "I'm a very non-religious person. I think everybody has the right to believe in any religion they want. It's fantastic. Whatever makes you happy is absolutely fantastic. That's a perfect question to say 'no comment' to, because I don't really wanna hear anybody else's opinion, and I don't think anybody should wanna hear my opinion, because it's very, very personal. And nobody knows anything anyway. So it's, like… If I had to choose a religion, it would be the Elvis Presley religion."

Marty's latest solo album, "Inferno", sold around 2,100 copies in the United States in its first week of release to debut at position No. 186 on The Billboard 200 chart. The CD was released on May 26, 2014 via Prosthetic Records (except in Japan, where the album was made available through Universal Music).