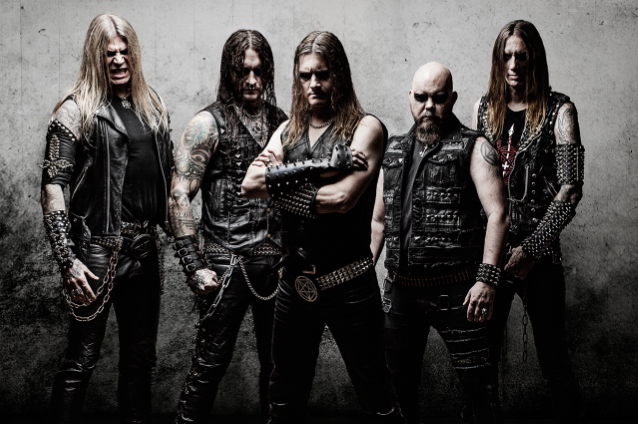 Swedish extreme metallers NECROPHOBIC have announced that they have parted ways with bassist Alexander Friberg "due to several reasons." They added in a statement: "We thank him for great times together and wish him the best in the future with his other obligations in NAGLFAR and his main band FIRESPAWN."

Friberg was more pointed in his response to the split, writing on his personal Facebook page: "Nothing lasts forever! It is with sorrow in my heart I make this announcement. I have been a part of NECROPHOBIC for 11 years now but my so called 'brothers' decided to fire me and replace me with the guy who is session for me during my time-out. I have no words for this really. Very nice of you guys... Now that is how you treat a band member since 11 years. Replace me with a guy who did 5 shows with you, ok... On the positive note is that I will have more time to focus on @firespawn_official and @naglfarofficial and to be home with my family, so I win! Life goes on"

NECROPHOBIC's eighth studio album, "Mark Of The Necrogram", was released in February 2018 via Century Media Records.

Formed in 1989, NECROPHOBIC belongs to the first wave of Swedish death metal bands. Ever since the release of its classic debut album, "The Nocturnal Silence" (1993), the band has issued a total of eight studio LPs, among them timeless masterpieces as "Darkside" (1997), "Bloodhymns" (2002) or the 2009 album "Death To All".

NECROPHOBIC was rejoined by guitarists Sebastian Ramstedt and Johan Bergebäck following the band's split with its axeman of five years, Fredrik Folkare.

Necrophobic have decided to part ways with Alexander Friberg due to...

Posted by NECROPHOBIC on Thursday, August 15, 2019