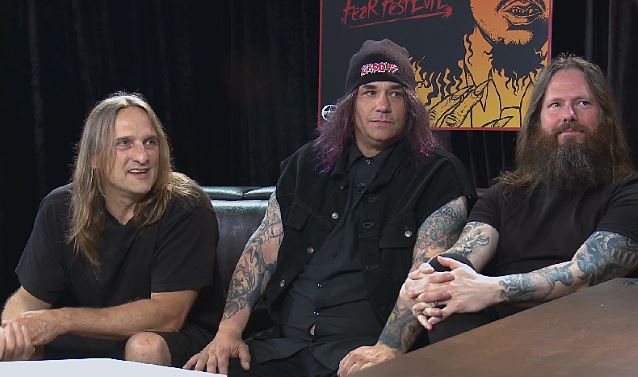 EXODUS will release their tenth studio album, "Blood In Blood Out", in North America on October 14 via Nuclear Blast. The album art was illustrated by Swedish artist Pär Olofsson, known worldwide for his incredible renderings that have graced the covers of countless heavy metal albums, including EXODUS' "Let There Be Blood".

Asked how he would compare the musical direction of "Blood In Blood Out" to that of previous EXODUS albums, Holt said: "I think it's a pefect blend of, like, the new, modern — or, as people say, the 'way too modern' — EXODUS and, like, a little of the classic stuff. But it's not in any way a throwback album. I mean, there's gonna be some people who say the songs are still too long and Gary Holt doesn't know what he's doing." Souza added: "I think that's with anything that you do. You'll attract the likers and the haters with everything."

Original EXODUS guitarist Kirk Hammett, who has been a member of METALLICA for the past 31 years, contributed a solo to the song "Salt The Wound".

"Blood In Blood Out" is EXODUS' first album since the departure of the band's lead singer of the past nine years, Rob Dukes, and the return of his predecessor, Steve "Zetro" Souza, who previously fronted EXODUS from 1986 to 1993 and from 2002 to 2004.