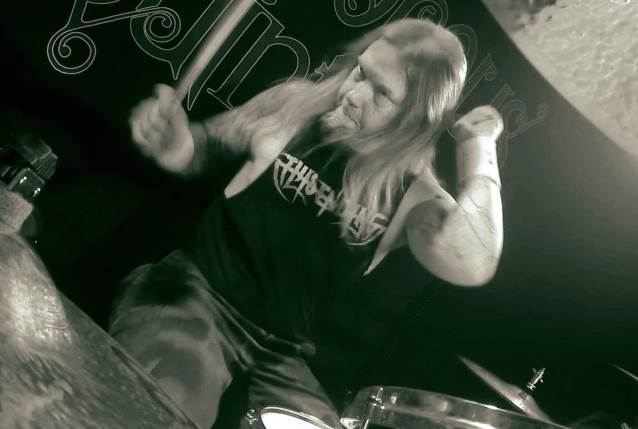 Ex-AMON AMARTH drummer Fredrik Andersson has slammed his former bandmates, saying that he was "forced out of the band" and was given a final "payout that still to this day feels demeaning."

Andersson was fired from AMON AMARTH in March 2015, just as the band was preparing to enter the studio to begin work on its latest album, 2016's "Jomsviking". AMON AMARTH opted to enlist a session drummer, Tobias Gustafsson (VOMITORY, CUT UP), during the recording sessions for the disc, but hired Jocke Wallgren to join them on the road. Wallgren was named a permanent member of AMON AMARTH in September 2016.

On June 28, Andersson took to his personal Facebook page to offer his side of his split with AMON AMARTH and to take the other members of the band to task for not allowing him to keep his "share of the past albums" that he appeared on.

"As I still get messages like 'why did you leave' and 'come back,' etc. I would like to make it clear to everyone that I didn't choose to leave AMON AMARTH. It's been described in some media as if it was a decision I made. That is not the case.

"So what happened? Well, I do have lots of things to say about the whole situation, but I will refrain from too many details. But for now: let's say we had had our issues and differences for a long period of time and it all added up into what eventually became a harsh split. For a long time, I felt I wasn't respected and treated as a full member despite all the years in the band and I guess it came to a boiling point from both sides.

"The actual split happened at a band meeting after my last tour in 2015 where I was asked to leave, along with a very unworthy offer where I would 'get to keep' my share of the public performance rights, something we had already split equally since 2003, but nothing else. Nothing else was on the table. No publishing, no recording royalties, no accumulated band profits or anything else. Oh yeah, I would also get to keep already paid out salary and my drum stuff (most of which I had paid for myself or gotten through my endorsement deals). When I asked for a few months monthly pay to get back on my feet, they said keeping the performance rights was well generous of them.

"I believe that if you're an equal partner, it's not only the economy you share: your ideas and opinions should be equally (or even more!) valued too. Of course, the way I felt the other band members treated me is pretty subjective. But trust me, in the talks after our split they made it VERY clear that I was not an equal member. And it wasn't even the offer they gave me that was insulting, but the fact that they thought they could dictate how much my share was worth.

"There were no financial reasons for what transpired, and the rest of the band must've known that just as well as I did. The band's economy was rather poor at the end of 2014, mostly due to very big investments we collectively did. But money was coming in and all the work we had done was about to bear fruit. And it did; the AMON AMARTH company made, according to the public numbers, around €1,500,000 ($1,875,000) last year alone (2017). Far more than the band ever made before. Now this is money mostly from the new album and its touring and I'm not saying I should have any part of that. What I'm saying is they could've afforded to let me keep my share of the past albums.

"In 2016, after a year of fighting them for what I thought, and still think, is my fair share, I was broke and in debt. And at a very hostile last meeting, where I felt both insulted and threatened, I had no alternative but to accept the terms I was offered. Which meant I would start receiving recording royalties from Metal Blade and get my one-fifth of the last touring profits, but also included signing away my shares of the public performance rights and publishing which we had also split equally until then.

"All I expected was that my share would reflect that I had been equal part of what we had been building up together for 17 years.

"When I joined the band, it still hadn't reached the big success we were to achieve later on. The debut album had shifted around 10,000 copies, so it wasn't like CDs were flying off the shelves back then. I would say it was mostly due to our hard work together and our relentless touring that built up the band into what it is today. So why should I not get the same cut from our shared past as the other members? After all, that's what we agreed on many years ago when we decided to go all in for the band:

"'Maybe the biggest factor is that we share all the money equally, no matter who writes what and usually money is the thing that people fight about.' — -Olavi Mikkonen, Headbangerslifestyle.com, March 14, 2016 (!)

"'When we started to roll in money, we made a decision to share everything equally. It does not matter who writes what, all the royalties are being shared.' — Olavi Mikkonen, crypticrock.com, December 30, 2014

"Well, guys, it sure feels quite tough to see these words translated into an offer where I got my cut of the last year's touring income that I had been part of and recording royalties. A significant amount, don't get me wrong, but still just a part of my share. You get to keep all of yours AND as a little bonus on top you get to split the rest of mine into your already growing accounts. And to add insult to injury, you decided to post this photo below, celebrating the deal we had just signed as victorious. Real classy.

"I do understand that this can come across as me complaining, but I would just like to explain what happened and how it affected me. I was forced out of the band, and in the process all my years of hard work were reduced to a payout that still to this day feels demeaning.

"Now that time has passed, I am actually quite relieved to have the chance to focus on other things and even though I am still very proud of my time in AMON AMARTH and what we built up and created together I am happy to not be a part of them anymore. To me, the money is mostly a symbol of my worth for them and in that sense, what hurt me more is actually how they treated me.

"It's frustrating that all the hours in the rehearsal room, all the days sleeping in vans, airports and on venue floors, etc. etc., are not valued when they decide to part with someone who has devoted 17 years alongside the other members in order to create one of the most successful death metal bands in the world. And that is what boils up in me when people ask me why I 'decided' to leave. Not for pity or to cause harm to a band I am very proud of, but to set the record straight regarding the realities of my departure.

"In the end, at least I get to keep my values and my integrity, but it came at a very high personal cost.

"And still, I don't regret my involvement in the band a minute. Being in a metal band isn't a career choice for me, it's a lifestyle. And I had lots of fun too, met lots of awesome people, some friends for life — none of them in AMON AMARTH though.

"I want to thank those of you who have supported me after the split, both personally, and musically with my drumming in THIS ENDING, NETHERBIRD and also recently in reactivated A CANOROUS QUINTET. Bands where I can be creative among other creative people and play the music I live for, and where I'm also being respected and my ideas are appreciated."

In a 2016 interview with Brazil's "Wikimetal" podcast, AMON AMARTH guitarist Olavi Mikkonen stated about the band's split with Andersson: "I don't really wanna go into details regarding Fredrik, but, basically, we just separated. It's kind of like a marriage that doesn't work, and you get divorced. And that's kind of what happened to our band."

AMON AMARTH bassist Ted Lundström described Wallgren as "a super-solid drummer" who is "very professional" and "very on-the-spot all the time." He added: "It is much easier to play if you have a drummer who is [tight]. It makes our lives easier."

As I still get messages like” why did you leave” and” come back” etc. I would like to make it...