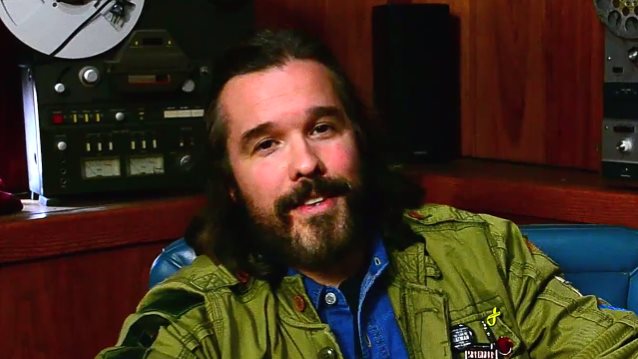 YEAR OF THE TYRANT is finishing up the pre-production on its first batch of tunes, to be made available later in the year.

Regarding how the band was formed, Sasha said: "Jason kind of put this together, and him and Vinnie go way back. And he knew the players he wanted, but we all get along great. It's kind of a family affair at this point."

Added Jason: "We've just gradually been building material, writing it together. We didn't really wanna say anything to anybody until we were ready to just basically suckerpunch you — you didn't see it coming; here we are.

"It's been amazing to finally play with these guys," he continued. "I played with Sasha when he did 70000 Tons Of Metal with HEATHEN a couple of years ago, and I clicked with him on a personal level and just jamming around on some riffs and stuff. I had a feeling that he was gonna be the guy to really gel and who we needed to have to come pull the whole thing together."

Nelson in 2012 settled a lawsuit he filed against ANTHRAX over the fallout from his departure from the veteran metal group. Details of the settlement were not made public.

The singer, who was in ANTHRAX for nearly two years — from late 2007 until July 2009 — filed a lawsuit in November 2011 claiming that Charlie Benante (drums), Frank Bello (bass) and Scott Ian (guitar) falsely stated in "numerous interviews" that he had "abruptly resigned" after getting sick, forcing a cancelation of a tour. The $2.65-million suit also alleged that Benante told BLABBERMOUTH.NET that Nelson "was a bully."

The Long Island native said his ex-bandmates' "intentional defamation" has caused him a loss of income and damaged his reputation.

Before reaching the deal, ANTHRAX attorney Brian Caplan told the judge that Nelson had been offered a "fairly small dollar amount" and co-authorship of eleven ANTHRAX songs that the band recorded for "Worship Music", according to the New York Daily News.

LaBella was a founding member of EXHORDER, the legendary New Orleans metal band cited by many as the originator of the riff-heavy power-groove approach popularized by PANTERA.