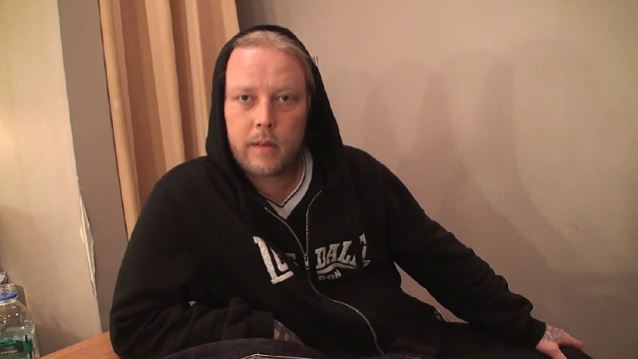 Former IN FLAMES guitarist Jesper Strömblad claims that his alcohol addiction was only a "small" part of the reason he left the band and says that IN FLAMES' current musical direction does not match his original "vision" for the group.

While answering questions from fans on his official Facebook page, Jesper addressed the most popular query: Will he ever return to IN FLAMES?

"No one never knows what the future brings, but the chances [of me rejoining IN FLAMES] are slim as they embarked on a different musical journey, they have a solid lineup and I'm on a totally different path in life right now," Jesper wrote.

"I would never go into details why I quit, but there is always one official story and there is the other… Alcohol is a quite small part of it.

"That can also answer the next question: What do I think of their new stuff? Listen to [my new band] THE RESISTANCE and that explains a bit of it.

"We simply went [in] different directions.

"I need to stand behind and feel inspired with what I do 100%, I owe it to the fans and, obviously, the band.

"All respect to IN FLAMES and their new approach, but, for me, the band was a guitar/riff-based melodeath band. And it's not anymore, but still amazing musicianship and I don't think it's wrong. But it's not the vision I had when we started out. But still, all respect to them and the huge success; [it is] highly deserved!

"So please, I wish, change the comment from 'Come back to IN FLAMES' to 'Welcome Niklas Engelin,' who is one of the nicest talented guys, and the one who fill my shoes perfect, and brings back an amazing energy live and personally!

"So there you have it.

"I do not and will never compromise with my music. I'm on a new path together with the guys in THE RESISTANCE who made me want to play again and the good feeling of being a part of a band. Dedication, friendship, genuine passion for the music! Money, fame, Grammys, etc., doesn't matter a crap if you you're not comitted 100% to it.

"I also have a solo album coming up, a facebreaking EP and album with THE RESISTANCE and some other other excitiing projects.

Strömblad announced his departure from IN FLAMES in February 2010, explaining in a statement, "I'm determined to fight and defeat my demons once and for all." The remaining members of IN FLAMES added: "The door to IN FLAMES is always open to Jesper. We are, and will always be, behind Jesper 100% on his way to recovery."

THE RESISTANCE's full-length debut, "Scars", was released in May 2013 via earMUSIC, the Hamburg, Germany-based international rock label which is part of Edel Group.

In addition to Strömblad, THE RESISTANCE features in its ranks current THE HAUNTED frontman Marco Aro.