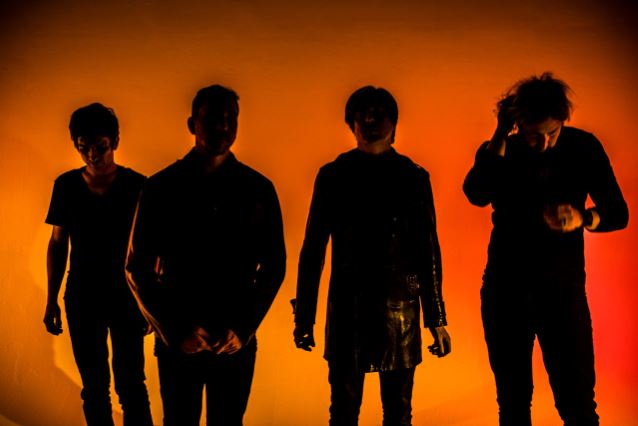 A teaser for "Echolocation", the forthcoming debut album from GONE IS GONE, the new project featuring MASTODON's Troy Sanders, AT THE DRIVE-IN's Tony Hajjar, QUEENS OF THE STONE AGE's Troy Van Leeuwen and guitarist-keyboardist Mike Zarin, is available below.

GONE IS GONE's self-titled debut EP was released on July 8 via their imprint label Black Dune Records in partnership with Rise Records/BMG.

Asked where the band's name came from, Sanders told NME: "We were honing in on things that were very human, relatable, real, and as far away from anything pretentious as possible. We were discussing subject matter of frailty and things that every human can relate to — love, loss, life, experience and opportunity and all things frail and fragile. The phrase 'what's done is done' or 'what's gone is gone' — you need to seize these opportunities now and make the most of it, reward yourself and fulfill yourself while the time is now.

"We think it's relatable and we're not trying to be anything that we're not. The level of pretentiousness is below zero — it's minus eleven, it's out of the fuckin' picture. This band was organically created and it's formed and has got to where it is now very naturally. It's all from the heart and it means the world to us."

Sanders also called GONE IS GONE "therapeutic." He explained: "I've learned it's a very healthy thing to do to jam with other people. Whether it's sitting for 30 minutes in someone else's practice room and just jamming with somebody, or learning a cover song together, or writing something together — any kind of collaboration I think is a healthy thing. You pull different positives from different people.

"For the bulk of the past 16 years, I've been very fortunate and proud to be in a band called MASTODON that followed the traditional cycle of write, record, tour-tour-tour, write, record, tour-tour-tour. It's worked out fantastic for us and I love every minute of it. However, when I get these brief periods away, and I'm doing something else that's creative musically, it just brings a refreshing feeling over me that hits a reset button. Every time I go back into the MASTODON world, I'm in such a great place mentally to dive headfirst in and give it all I've got."

GONE IS GONE made its live debut on April 27 at the Dragonfly in Los Angeles and completed a handful of dates in July.