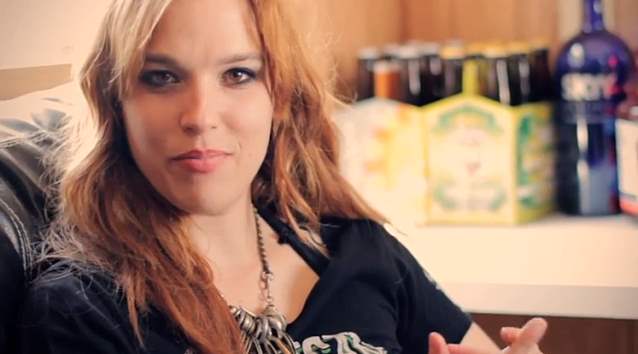 Total AC Blog recently conducted an interview with HALESTORM lead singer Lzzy Hale. An excerpt from the chat follows below.

Total AC Blog: How does it feel to be the chick amongst the guys? Do you ever feel like you need any girl time or do you like it?

Lzzy Hale: I like it! Too much estrogen makes it a little weird! I spend so much time with the guys that literally I become a crazy person when there are too many girls around. We're usually not touring with a bunch of girls. The last tour I had that was consistently with another girl was Carnival Of Madness last year with Amy Lee [EVANESCENCE]. Within the first five minutes of us meeting, it was shoes, boys, makeup, all these things pouring out of me that I never talk about! The guys in my band were, like, "You become a different person when Amy's around!" I like being a girl. I like being with my guys. We all meet in the middle somewhere. They're not über agro, they actually have really good hygiene [laughs] and for the most part, they enjoy everything that I like to do too. I think that just comes from growing up together. I've never taken being a girl in a band as a negative thing. It's nice to stick out like a sore thumb on whatever bill and it's nice to torture all of the guys that are on the tour with you because you can wear the high heels and they can't! It's a lot of fun!

Total AC Blog: You are a role model to so many of your female fans. How does that make you feel? Does it freak you out at all or do you kind of just go with it?

Lzzy Hale: I always err on the side of honesty. I'm sure I'm going to say something stupid over Twitter or something like that, if I haven't already. Either way, whether it's a bad influence or a good influence, I'm not going to pretend to be something I'm not. It's just too much work to keep up with this weird façade. People have kind of attached themselves to me because I represent something to certain people and it's so incredibly flattering. At first, it did freak me out to the point of where I was, like, "Should I say that?" I think the difference between the first record and the second record was kind of like the battle between that in my mind. The first record was über clean and a little vague. It was me trying to figure out if I should just say what I want to say or if I was going to get angry letters from parents. This last record that we did, "The Strange Case Of…", I just, for lack of a better term, just said "fuck it" and wrote what I wanted to write. I think that people gravitate more towards the honesty rather than if you're trying to be this squeaky, clean person. Hopefully I don't scar too many people! It's really flattering, because we see a lot of girls coming to our shows that are starting bands and started playing guitar and writing songs. It's really neat to see. I didn't have a whole lot of that growing up, which is part of the reason why all the people in my band are guys because I connected more to that and that's what there was. It's really neat to stand on the stage and see all these girls. I'm very proud.