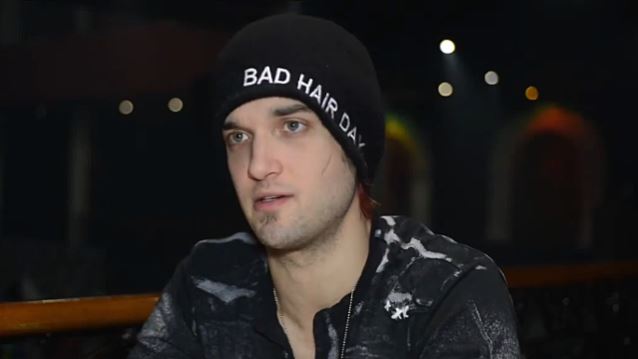 France's TV Rock Live recently conducted an interview with HALESTORM drummer Arejay Hale in Paris. You can now watch the chat below.

Speaking about the making of HALESTORM's upcoming album, "Into The Wild Life", Arejay said: "Every time we go to make [a record], we have more touring experience, we have more... just experience in the studio and being in a band. We do cover EPs in between records, and that's just good studio training for us."

He continued: "Going in to make this record, we did it a little bit different than the first two. The first two, we were with [producer] Howard Benson, and that was great working with him, 'cause he had his system how a record was done. The structure is very 'Bam! Bam! Bam! Done.' And with this one, we kind of did it differently. Instead of doing section by section, we did it one song at a time. So we would go in the studio, start on one song and then just keep working at it until it was done. And then sometimes we would put it aside and work on something else and then go back to it later. But there was a lot less structure, which is sometimes a bad thing, 'cause we're, kind of perfectionists. But it was actually a really good thing, 'cause we worked with this producer, Jay Joyce, and he had a great vision for who we were. And we felt more confident going into the studio — so confident that we just decided to record it live. Well, not live, but all of us playing together and recording the whole band playing all the music at the same time. 'Cause usually you do it piece by piece — you do the drums and then later you do the guitars and overdub them and put them together in Pro Tools."

Arejay added: "The way records are made now, for me, I just didn't wanna do it that way, 'cause I felt like it kind of sucked the life out of the band. We're kind of an organic, what-you-see-is-what-you-get kind of band. If you come to a show, you see that we don't use tracks. We don't even play to a click track.

"So, anyway, long story long, I think this record, we went into it with the objective of trying to capture more of what we do live, and try to capture that on tape. And I'm damn proud of it. I think we did great."

"Into The Wild Life" arrives on April 14. The first single, "Apocalyptic", recently became HALESTORM's third No. 1 single at rock radio.

HALESTORM plans to release a photo book called "To Hale And Back" in May. The book, for which the band teamed with photographer and longtime friend Rob Fenn, will document the group's career so far. Fenn has been traveling with the band since 2012 and a description of the book says that his pictures "capture HALESTORM at their most intimate, their most vulnerable and at their most triumphant moments via his trusty lens, and unwavering eye."

The 272-page hardcover photo book is also described as "the storybook tale of one young band’s rise to superstardom, as well as the build-up to their highly anticipated new album, 'Into The Wild Life'."

After its current European tour ends, HALESTORM will begin a North American jaunt with THE PRETTY RECKLESS on April 22 in Nashville.