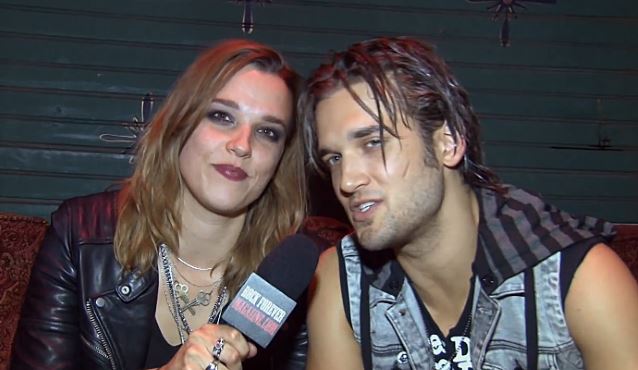 RockForeverMagazine.com recently conducted an interview with HALESTORM singer/guitarist Lzzy Hale and drummer Arejay Hale. You can now watch the chat below. A couple of excerpts follow (transcribed by BLABBERMOUTH.NET).

Lzzy: "What we set out with this one, and I believe we accomplished, was to kind of bridge the gap between what people have seen live and what they hear on our records. So we did it very grass roots. We went, basically, back into the method that AC/DC has used, and LED ZEPPELIN has used. It's, basically, every single day, we would hit 'record' and it would be all four of us in one room in a circle, playing together, recording live, and then we would add some stuff on top of it. All of the vocal performances are from beginning to end of the song; nobody's cutting anything up. There was no Auto-Tune. It's very organic and it's very 'warts-and-all' unapologetically us. It's one of those things where I feel like, at this point in time in our lives, we had to at least try to do it that way. And we're excited, man. I hope that people like it. But the important thing right now is that we're so stoked."

On how the recording process for HALESTORM's upcoming CD was different from previous recording experiences:

Lzzy: "The way we've done the last two records has been kind of more 'assembly line' and, you know, studio… everything kind of being done separately. There was no song that we actually we did all together. It was two days and [Arejay] did all the drums for the entire record, and then two days I did all my guitars, two days Joe [Hottinger] did his guitars, and then we did bass and then I sang. And we all did everything separately, so it was hard to get that vibe. And on this record, [we] would pick one song a day, and we would do it over and over and over again until we got it right. So you're just waiting for that magical moment where everyone's riding the same wave and we all don't royally mess up. 'Cause that's the thing: it's, like, if one person messes up, we've all gotta do it all over again. So it was a lot of fun."

Arejay: "The cool part is that this is the first record where I feel like we've really captured our live energy on record, which we [hadn't] done [before]. Everybody comes up to us after the shows and they say, 'You guys kill it live, but the record just doesn't have the same energy on the recordings.' So hopefully this one will be a little bit closer to that."

Lzzy: "And I know that this should be such an 'oh duh' thing, but I had never recorded any of our records while I'm playing at the same time. And you sing so much differently when you're playing a piano and singing, or you're playing a guitar and singing, or if you just take it all off, and then you're, like, singing right now, so you kind of overdo [it]. So it was really cool. When we were listening back to stuff, I'm, like, 'Wow! It sounds like us.'"

On the lyrical themes covered on HALESTORM's new album:

Lzzy: Honestly, a lot of our interactions with our fans — and we're very active on social media — so a lot of those stories that we've been talking about leak themselves into our songs. A lot of it is kind of fan-oriented. And through them… I don't know… We've been very… I hate to keep bringing up this word, but we've been very unapologetic even in our personal lives. We've kind of grown up a little bit, and we're doing this thing called 'whatever the F we want.' You know what I mean?! And it's just such a beautiful time to be that in a band. We're all at an age that we're still kind of perpetually 14 inside, but we've accomplished more than we've ever thought. So a lot of that leaked itself into the lyrics too."

HALESTORM's 2012 album, "The Strange Case Of…", yielded two chart-topping rock singles in "Freak Like Me" and the Grammy-winning "Love Bites (So Do I)".

HALESTORM will head out later this week on a second leg of shows opening for country-rock artist Eric Church, beginning on Thursday (January 8) in New Orleans.