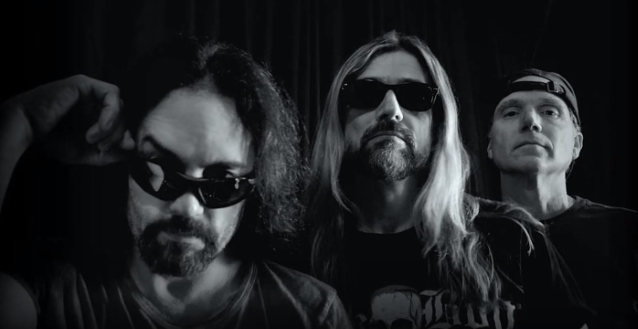 A 2014 live rehearsal, unreleased instrumental recording of MEGADETH's "Wake Up Dead" by the band's former members Nick Menza (drums), Chris Poland (guitar) and James LoMenzo (bass) can be heard below. The unnamed trio came together when Menza and LoMenzo decided to join forces in a new project, later inviting Poland to handle rhythm and lead guitar.

Menza, Poland and LoMenzo's first jam session took place on November 1, 2014 at Menza's Disintegrator Studios in Studio City, California where they cracked through some of the old MEGADETH catalog along with some of their favorite METALLICA and LED ZEPPELIN songs. The trio then rehearsed a handful of times before disbanding later that year due to other musical commitments. Soon after, Menza joined Poland's band OHM:.

Late in the evening on May 21, 2016, Nick collapsed after suffering a heart attack during an OHM: concert at the Baked Potato in Studio City, California and was pronounced dead upon arrival at the hospital. The Los Angeles County Department of Medical Examiner-Coroner said Menza died of hypertensive and atherosclerotic cardiovascular disease.

Menza joined MEGADETH for the 1990 album "Rust In Peace" and for the next ten years became associated with the band's "classic" and most profitable era.

Following the reissue of the entire MEGADETH catalog, Menza was invited to reunite with the band in 2004. Days after a reunion was announced, Menza was replaced with Shawn Drover.

LoMenzo joined MEGADETH in 2006 and appeared on two of the group's studio albums, 2007's "United Abominations" and 2009's "Endgame". He was fired from the band in 2010 and replaced with returning original MEGADETH bassist David Ellefson.

"Megalife: The Autobiography Of Nick Menza" by J. Marshall Craig will be released on December 11 via Post Hill Press.