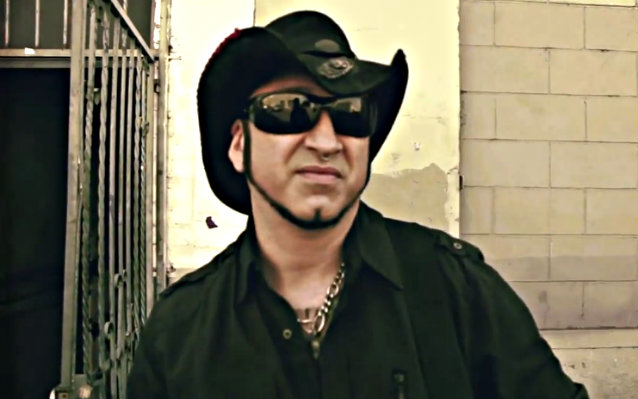 A one-and-a-half-minute video clip in which HELLYEAH guitarist Tom Maxwell talks about the band's approach to putting together its fourth album, "Blood For Blood", and how he believes this is the one that fans have been waiting for can be seen below. The clip also serves as a "sneak peek" behind the scenes of HELLYEAH's recent video shoot for the song "Sangre Por Sangre (Blood For Blood)" with director Robert Sexton (SOULFLY, DEATH ANGEL, THE DWARVES, CAVALERA CONSPIRACY, AMEN, MONDO GENERATOR, GENÖCIDE) in Hollywood, California.

According to The Pulse Of Radio, HELLYEAH has made two songs available from its new album, "Blood For Blood". The first, "Cross To Bier (Cradle Of Bones)" was offered as a free download over the weekend before being released Tuesday (March 25) on iTunes alongside "Sangre Por Sangre (Blood For Blood)", the new disc's title track and first single. Drummer Vinnie Paul Abbott told The Pulse Of Radio the story behind singer Chad Gray's lyrics. "Really, the song's kind of based around the old-school law, you know, of 'eye for an eye, tooth for a tooth, blood for blood,'" he said. "You know, today's society, you can get away with murder, pretty much. You can kill people and be out of prison in two or three years, you know. And if people had to pay the price for what they do with the same kind of payment — eye for an eye, tooth for a tooth, blood for blood — I think people would think twice about it, and that's pretty much where Chad was heading with that."

He explained, "We felt like we had really got some momentum and the fans were really into where we were going and what we were doing musically and we got into the studio about three weeks after that tour was over and it just really became obvious to us that Greg and Zilla, they weren't really in the same head space as us."

HELLYEAH has recruited new bassist Kyle Sanders, and will announce the name of a touring guitarist shortly.

The band will head out on a mix of festival gigs and shows with AVENGED SEVENFOLD starting on April 12 in Dawson Creek, British Columbia.