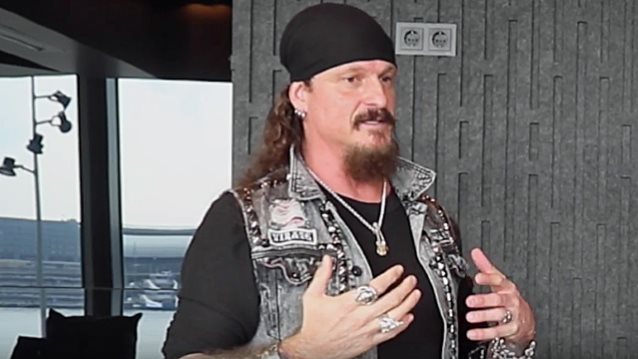 Lilo of HeadBangers LifeStyle recently conducted an interview with ICED EARTH guitarist Jon Schaffer. You can view the entire interview below. A few excerpts follow (transcribed by BLABBERMOUTH.NET).

Jon: "It's a really important milestone, because we've just completed our contract, so this is our last record under kind of the old model of the way the record business was done. I'm very proud of everything the band [has done]. Everybody executed their parts killer and I think the songs are great. Obviously, in my mind, I feel like it's headed to be a classic, but the fans always decide that, not me."

On whether ICED EARTH has any interest in releasing their own craft beer:

Jon: "No, not really. I mean, that doesn't mean it's off the table, but when people start doing it too much, then I think it's a little bit trendy. You go make a deal with a brewery, you put your label on it and that's how it works. But… I don't know…I don't think we're gonna do that, but who knows? I'd probably be more into doing a really cool single barrel of whiskey of some sort rather than beer."

On the importance of coming up with new ways to promote and market your band:

Jon: "It's different, the way music is consumed [nowadays]. You have to get creative, for sure. I think it might end up being cyclical. I'm not sure that it's always gonna be that way. I think this is the result of a generation growing up with things a certain way. My 12-year-old daughter wanted a record player for her birthday a few months ago, so I was, like, 'Hell yes!' It's not that I think that vinyl is gonna come back and save the business as it was, but I feel like what's happening with the business for an established band is actually a good thing, because we're gonna be able to be in more control and we're not gonna have to live under the old structure anymore. It's sort of like the Wild West. There's a lot of opportunity and a lot of people are afraid of it, and I get that, 'cause change is always a little bit scary for people. But I look at it with optimism."

On his "fighter's mentality":

Jon: "The very existence of the band is a fight. Many of those fights through all the years, various roadblocks come your way and you either quit or plow through it or maybe detour around it, which is a little bit more peaceful sometimes. It's a battle. That's why when people say they wanna get into this, a lot of people don't really know what they're getting into. It's way more than the illusion or the idealism that goes with, 'Oh, I'd love to be in a band and go on tour,' and all that. That's cool, but there's a lot of other stuff that happens behind the scenes that people aren't really aware of."

On what has kept ICED EARTH going all these years:

Jon: "I think, for one thing, the crafting of the songs, which is the whole reason that I started all this anyway. That desire to be able to channel the energy the right way that you can really move somebody and have a great effect on their life and get them through some difficult times. That's a goal, but it's a way for me to… it's therapy somehow a lot of times. I don't know exactly how it works, but it's something that's a big deal for me. And it's far more important than the rock-star bullshit. It's the songs — that's what really matters, in my opinion. Also, I like a good challenge. So if somebody tells me I can't do something, then I'm gonna work that much harder to do it. The only way I'm gonna quit is when it's on my terms, not because somebody is trying to put something in my way. Whether it's a bad business situation or whatever the deal is, I'm gonna push through that."

On plans for a third album from DEMONS & WIZARDS, his project with BLIND GUARDIAN vocalist Hansi Kürsch:

Jon: "We have finally committed to doing it. We've wanted to through the years, but it's always a time thing. We're, like, 'Yeah, we'll talk about it, we'll get together,' and then, before we know it, a year's gone, and then another year. It's been 12 years since this [2005's 'Touched By The Crimson King']. I've already sent Hansi two songs of material and he's worked out vocal melodies and cadences for it, so we're in the very early stages, but it is happening. We're not gonna have the art suffer to reach some deadline or whatever, 'cause there isn't one. We don't even have to do it — we just want to, and we wanna make it good; that's the most important thing. So putting time pressure is not the smartest idea. But it depends on the holes in his schedule and mine. I mean, I have my own studio now, so when I'm not on the road… The problem is always getting out of that live mindset, which is completely different for me than being in writing mode. It's gonna be a little bit more difficult this summer 'cause we're only home for a few weeks and then back and then home for a few weeks. And it usually takes several days to come down and try to get into that more meditative train of thought to channel the stuff. But it'll happen. We're doing it."

"Incorruptible" will be released on June 16 via Century Media. The cover artwork for the disc (as well as additional illustrations to every song) was created by David Newman-Stump from Skeleton Crew Tattoo (pencil illustrations) and Roy Young (colors).