Former BURY YOUR DEAD guitarist Eric Ellis, who was sentenced to 20 years in federal prison after being convicted of conspiracy and violation of the Racketeer Influenced and Corrupt Organizations (RICO) Act as a member of a violent Jacksonville, Florida gang, will release his solo album, "The Weight Of Knowing", on October 15.

Known for his progressive talent in REFLUX and BURY YOUR DEAD, Ellis caught the attention of the music industry with his dramatic stage performance and aggressive guitar riffs. He toured extensively, playing sold-out venues with such bands as KILLSWITCH ENGAGE and HATEBREED; entertaining thousands at monumental festivals, including Ozzfest and Family Values tour.

During 2008, in a turn of unfortunate events, Ellis was victim to a random attack outside of a Milwaukee venue. He was beaten with bats and a hammer at gunpoint, allegedly as a gang initiation, and he sustained serious injuries and a seizure-inducing concussion, Despite this life-threatening incident, Ellis recovered while focused on his work in his studio in Atlantic Beach, Florida. He began writing and producing for bands such as CATALEPSY and BORN OF OSIRIS, while quietly piecing together his own dynamic solo project. The resulting 11-track instrumental collection of guitar-driven melodies opens a new perspective using odd time signatures, eight- and seven-string guitar artistry, and explosive technical talents. In addition to playing guitar, Ellis played bass and keyboards, using the wealth of his production experience to create an explosive opus.

"The intention of this work was to create a personal landscape that has more to offer, to push the boundaries of my own creativity," Ellis explains.

In late 2010, just as the album was completed, Ellis was arrested and later convicted of conspiracy and violation of the Racketeer Influenced and Corrupt Organizations (RICO) Act as a criminal organization in Jacksonville, Florida. Although Ellis was handed down a hefty sentence of 20 years in federal custody, he refuses to be defeated by his incarceration. His love for music and career as a musician has not yet ceased. He continues to perfect his expertise on both drums and guitar while in prison. In an unprecedented event, Ellis is releasing his instrumental legacy to the public.

Ellis states: "The title ['The Weight Of Knowing'] refers to the burdens that one places on themselves. For me, 'the weight' was the desire to create this kind of abstract art via music, especially considering my commercial accomplishments with BURY YOUR DEAD; which was a more simplified and structured songwriting process… The weight was taking another path. As an inmate, the title takes on a whole new meaning. Now, 'the weight of knowing' that this collection has been recovered and released at great expense of the few people that have diligently taken on the task is both humbling and incredible."

In June 2013, Ellis began his appeal to overturn the extensive sentence.

"For anybody that listens to and enjoys this music, I thank you from the bottom of my heart," he says.

"I'm in federal prison for the RICO act which is organized crime, my record is public and I have nothing to hide…

"My circumstances in releasing this album are unique, to say the least, and if not for the support of genuine people, then this would have never made it out there at all.

"For the fans, for my family, my friends, my loved ones, my fellow inmates who are currently locked up or have been on this side of the wall in their lives — thank you for your support."

Ellis was a member of BURY YOUR DEAD from 2004 until August 2008, when he left the band for "medical reasons" and due to "personality differences." 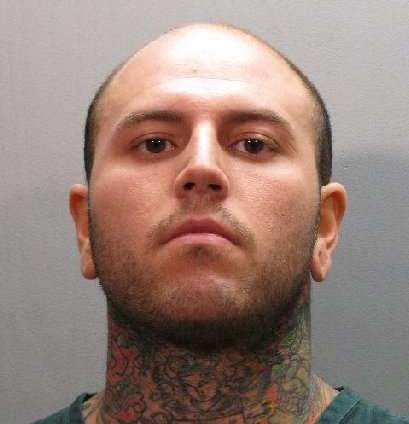