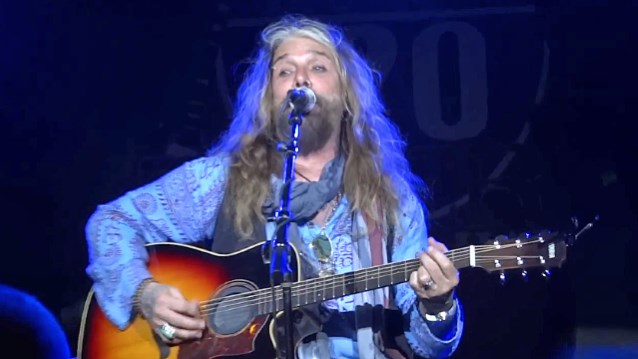 John Corabi, former lead singer of MÖTLEY CRÜE, THE SCREAM and UNION, recently kicked off a tour during which he is celebrating the 20th anniversary of the MÖTLEY CRÜE album that he appeared on by performing most of the songs from the LP with his backing band.

Corabi originally joined CRÜE in 1992 as the replacement for the group's original singer, Vince Neil, who was fired due to personal differences. With Corabi on vocals, MÖTLEY CRÜE released one critically acclaimed full-length CD, which ended up being a commercial failure in the wake of grunge despite a Top-Ten placing on the album chart. When Neil returned to the fold in 1997, Corabi was left on his own and formed the band UNION with ex-KISS guitarist Bruce Kulick.

"A lot of fans said, 'No way I was buying that record when it came out,'" Corabi told CantonRep.com about the "Mötley Crüe" record. "I think we had kind of a die-hard fan base when it came out, but a lot of the people were angry with MÖTLEY for getting rid of Vince, or Vince leaving or whatever happened. But a lot of fans, once Vince came back, saw it, picked it up and ended up really enjoying it. It's still trudging along and selling and doing its thing. The best thing to me is that it still sounds as relevant now as it did when it came out."

According to Corabi, the idea to revisit his time with MÖTLEY CRÜE came from a brainstorm session with his manager.

"A lot of people assumed I faded off into the sunset," Corabi told CantonRep.com. "So my manager and I had the plan to do the acoustic record and build a little from there. I was gonna do a new electric record, but he said, 'MÖTLEY's doing their farewell, and they're not playing any of that material you were on. Learn that whole record and tour it.' We just started doing it, but there's a lot of interest in the fact we're out playing that record."

Corabi recently spoke to Philadelphia's 93.3 WMMR radio station about the possibility of collaborating again with Mick Mars on the MÖTLEY CRÜE guitarist's forthcoming solo album. "I don't know what he wants to do musically, but at the end of the day, I love Mick Mars — he's one of the sweetest human beings you'll ever meet in your life — and anything I can do to help him with his solo record, I would be more than happy to do," Corabi said. "I appreciate the fact that Mick has been just stupidly supportive of what we did in the past, and I appreciate Mick's talent as a guitar player; I think he's totally underrated. And anything I can do to help him, he's more than willing to help me with what I wanna do. So we'll have to see where it goes from there."

In a 2012 interview, Mars stated about MÖTLEY CRÜE's 1994 self-titled album: "I thought that was probably… To me, and I can only speak for me, I think that was probably the best album we've done. Musical-wise, the songs, I felt, were strong. And just musically, to me, it was, I guess, my BEATLES 'White Album'; that's kind of how I feel about that one. I'm not saying that any of my other albums are crummy or anything like that — I love every album that we did — but that one just has a special thing for me."