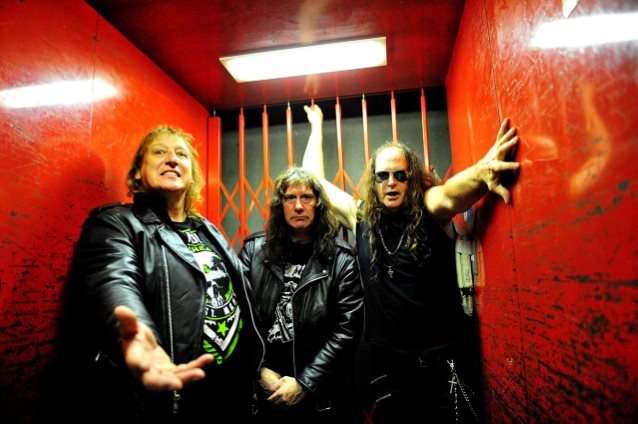 Mark Kadzielawa of 69 Faces Of Rock conducted an interview with bassist/vocalist John Gallagher of the British/American heavy metal trio RAVEN prior to the band's May 18 show at Reggie's Rock Club in Chicago, Illinois. You can watch the full interview below. A few excerpts follow (transcribed by BLABBERMOUTH.NET).

On the band's early days:

John: "We were very similar to the other bands that had been around in the world at the time. We learned our trade. We weren't ready to get a record deal. We learned to play, we learned how to play to an audience, play to an audience that wasn't interested, how to kick them up the ass and get them interested. If they actively hated you, feed that anger and feed that hatred. We watched very many accomplished practitioners of our arts. The first bands we ever saw was THE [SENSATIONAL] ALEX HARVEY BAND and SLADE. You couldn't have a better education than watching both of those bands who were just unbelievable. We were very lucky in Newcastle and we had a relatively small hall and every band of note came there and you could see them close up and see what's going on. There was no instructional videos and DVDs or any of that in the dark old ages. We learned from seeing real bands."

On hearing METALLICA for the first time in 1983:

John: "We were told, 'Check these guys out.' I was given a cassette called 'No Life 'Til Leather'. It kinda sounded like MOTÖRHEAD at 78 [RPMs] on the record player. [I thought] 'These guys are cool.' We took METALLICA out on their first tour. We took them out as opening act on the 'Kill 'Em All For One' tour, which was crazy. Seventeen people in a six-bunk bus, going nuts across America. That was inspirational for a lot of American kids who ended up starting their own bands after that."

On RAVEN's chemistry during their early days:

John: "It was very much 'all for one, one for all.' Every one of us contributed writing, lyrics and ideas. It was very much a group-mind type of thing, we were all thinking in the right direction, even though we all had differences. A lot of it unspoken, which is really interesting."

On getting signed to Atlantic Records for the release of 1985's "Stay Hard":

John: "We ended up doing a show in New York where we headlined with METALLICA and ANTHRAX at the Roseland Ballroom. From that show, three bands got signed to major label deals. They say, 'Be careful what you ask for, because, sadly, you may get it.' We were recording an album. At one point, it was, like, 'Maybe we need to record an album to get off Neat Records. What do we got lying around?' Some songs we were keeping to one side, then when we had an interest from Atlantic, we said, 'Let's bring those songs back in.' Songs like 'Extract The Action' and 'On And On' and stuff like that. We did it with our sound engineer and the mix wasn't quite right, so we brought in [producer] Michael Wagener to mix it and we re-recorded a couple of songs. The record company asked for 'Hard Ride', which was a silly idea, and we re-did it anyway and we re-did 'On And On', which came out much better. It's got commercial aspects to it, but it's not a particularly commercial album."

John: "Yeah, we got pressured to be more commercial on the next record. It happened with many, many, many bands. We just happened to be the poster boys and got a lot of shit for it, as it were. We did an album called 'The Pack Is Back', exemplified by its horrible cover. The idea was that we'd look like us, like crazed football players, but we looked like crazed hairdressers. The album was done with [producer] Eddie Kramer, who's famous for [Jimi] Hendrix and KISS and whatever else. His forte was recording a live band and we're a live band. But our drummer decided he wanted to record to a click track without anybody else playing, which is strange. He played behind the beat anyway, so everything has a leaden feel; it's plodding. Eddie, we tried to make a high-tech heavy metal album. It's funny, we got a guitar synthesizer and half the sounds sounded exactly like the ones that were on the JUDAS PRIEST album 'Turbo' at the same time. We were trying to push the envelope with that. There's some okay songs, but some are 'eh'; I'm not happy with them. Basically, we were led up the path. 'If you do this, if you do that, we'll be able to get you on this tour.' It was a deal with the devil. It never worked out. We just said, 'This is ridiculous.' I'd rather do what we love and have it stand or fall on its own merits."

RAVEN's latest album, "ExtermiNation", was released in April 2015 via SPV/Steamhammer.