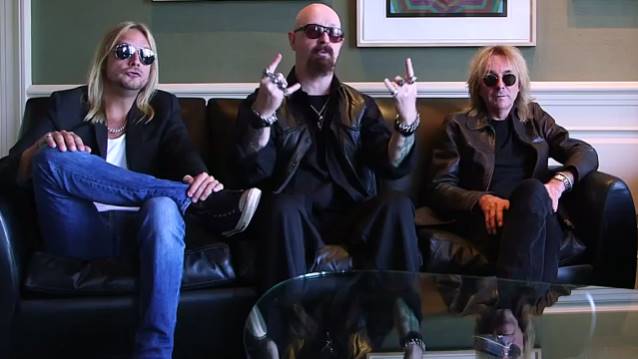 "Noize In The Attic" has unleashed a two-hour celebration of the new JUDAS PRIEST album, "Redeemer Of Souls", with special guests Rob Halford, Glenn Tipton and Richie Faulkner and featuring in-depth interviews, classic cuts, deep tracks and loads of rarities. You can listen to the show using the PodOmatic widget below.

JUDAS PRIEST's 17th studio album, "Redeemer Of Souls", sold around 32,000 copies in the United States in its first week of release to land at position No. 6 on The Billboard 200 chart.

"This album has got vikings, dragons, aliens, a bit of bible thumping and some guns," Halford told Ultimate Classic Rock. "That's what you need in a metal record. It's strong and it's intense, but there's a lot of fun and exploration, through at least that side, with the lyrical content."

"We felt it was important to make another classic metal album, which is generally what PRIEST has been famous for over the last 40 years," Halford continued. "We had great success with [2008's] 'Nostradamus', which was something that we'd always wanted to try. I think there was a nice enough space of time, musically, to do a lot of things but primarily just to kind of get all of the pieces into place to make what we feel is one of our best records — with all of the elements of what classic PRIEST stands for."

"It's nice to get back to what people want to hear," Tipton added. "This album just typifies JUDAS PRIEST."