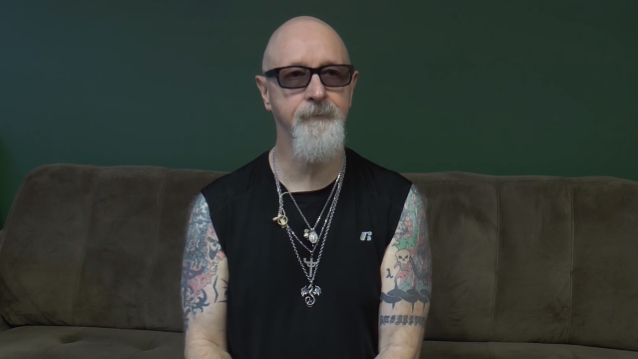 At the Atlanta stop of JUDAS PRIEST's "Firepower" tour, singer Rob Halford sat down to discuss his long history with Shure as well as his new Axient Digital wireless system. Check out the video below.

"The one thing about Shure microphones is that in all of my years, I don't think I've ever had a Shure microphone fail me — because the components are so rigid and so trustworthy," Halford said. "And that's what you need as a singer.

"When I pick up the mic backstage before I walk out, and I'm holding on to a Shure microphone, I don't have to worry — I know it's going to do the job," he continued. "And because this voice is kind of extraordinary, and because it can do some crazy stuff, I wanna know that the microphone is gonna be able to pick up every nuance of the performance, particularly live. I even use the 58 [Shure SM58 industry standard for live vocal performance] when I do in-studio recordings as well. When I'm really belting out the stuff, I still love to have that live feel, so I'll grab on to a 58 and we''ll lay down the tracks.

"I did drop the mic just recently," Halford admitted. "When I saw [President Barack] Obama drop the mic [at the 2016 White House Correspondents' Dinner] [laughs], [I thought] 'I'll do that one day.' I did it quite recently, at the end of 'Painkiller', when I let go of one of my piercing screams at the end of the set, and I just dropped the mic. And as I was dropping it, I'm thinking, 'Oh, should I have done that?' And it hit the deck. And one of the crew ran out and picked it up and [gave it] back [to me]. Nothing. Perfect. Not even a blip."

The British heavy metal legends are continuing to tour in support of their latest album, "Firepower", which came out in March. The LP entered the Billboard 200 chart at position No. 5, making it PRIEST's highest-charting album ever.

We took a road trip to Atlanta to catch up with Legendary Heavy Metal artists Judas Priest on their Firepower tour. An incredibly gracious host, Rob Halford sat down to discuss his long history with Shure as well as his new Axient Digital wireless system.
Learn more about Axient digital at https://shu.re/2Sjl7hj