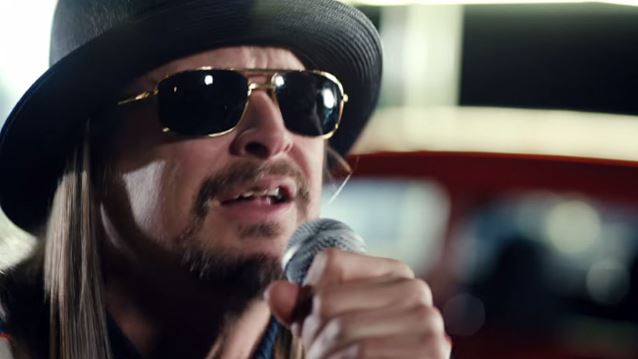 According to The Pulse Of Radio, Kid Rock has released the video for "First Kiss", the title track and first single from his upcoming 10th album, due out on February 24. The singer has also posted a teaser clip featuring New Year's Eve "first kiss" photos submitted by fans as per Rock's request.

"First Kiss" is a straightforward rock number with slight country tinges that is about 1000 miles away from Rock's rap-rock roots. Rock himself told The Pulse Of Radio a while back that he's proud of his changing sound. "I feel like, musically, every day I can wake up and be a different person, and I love it," he said. "I wouldn't change it for the world. You know, I wouldn't pigeonhole myself into one thing. I wouldn't go too far left or too far right."

Rock was recently accused of homophobia after he used the word "gay" in a pejorative manner in a recent article he wrote for The Guardian.

Rock wrote, "Rap-rock was what people wanted at the time… It turned into a lot of bullshit and it turned out to be pretty gay." He added, "If someone says you can't say 'gay' like that you tell them to go fuck themselves. You're not going to get anything politically correct out of me."

Rock also said that as an ordained minister, he didn't "look forward to marrying gay people, but I'm not opposed to it."