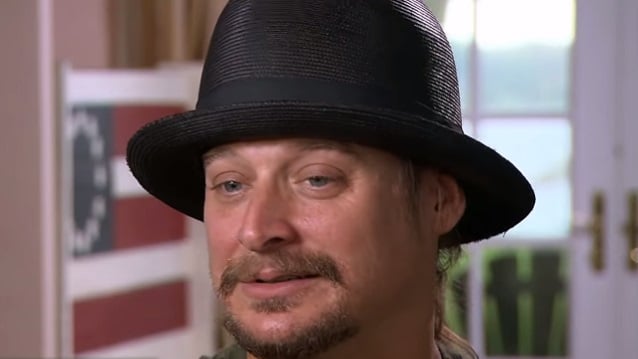 On politics, the man whose real name is Bob Ritchie offered, "I am definitely a Republican on fiscal issues and the military, but I lean to the middle on social issues. I am no fan of abortion, but it's not up to a man to tell a woman what to do. As an ordained minister, I don't look forward to marrying gay people, but I'm not opposed to it."

Rock continued, "I'm 43 and about to become a grandfather, but it keeps my redneck street cred up. I could be a great-great-great-grandfather by the time I'm 80. I am excited, but also nervous for my son. He was dropped on my doorstep at six months when I had no money and was trying to be a rock star. I didn't have a clue."

The singer added that his son does not have the "partying gene" and will go home after a few drinks, also saying, "I could have set a better example for my son. When he was a teenager, I'd bring home girls that he had more in common with than I did."

Rock also admitted — or bragged, depending on your point of view — "I'm not just wealthy, I'm loaded. I can say that because I'm not embarrassed — I've made a fuck-ton of money, but I've never made a dishonest dollar."

Rock also said in his post that he believes all drugs should be legalized and taxed, he enjoys buying guns although he doesn't think "crazy people should have guns," and that his original style of rap-rock "turned into a lot of bullshit and it turned out to be pretty gay." He added: "If someone says you can't say 'gay' like that, you tell them to go fuck themselves. You're not going to get anything politically correct out of me."

Rock will release his 10th studio album, titled "First Kiss", on February 24, with an extensive summer tour to follow.