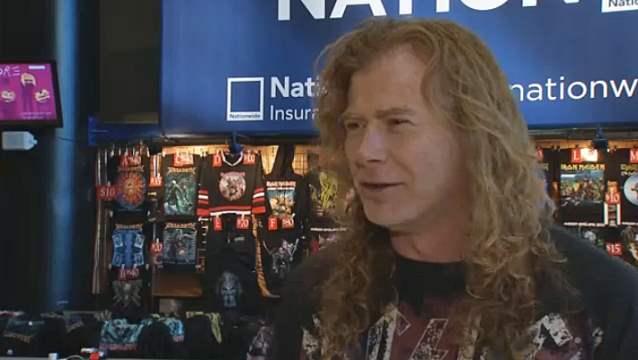 Stacy McCloud of WZTV Fox 17 conducted an interview with MEGADETH mainman Dave Mustaine prior to the band's September 5 concert at Bridgestone Arena in Nashville, Tennessee as the support act for IRON MAIDEN. You can now watch her report at Fox17.com.

In a recent interview with VH1's Tuner, Mustaine stated about how MEGADETH chooses the setlist for its tours: "Choosing songs for the set kind of depends on who we're playing with. We know what songs are necessary to play that are crowd favorites and then we have a handful of songs that are interchangeable depending on the show. We were joking around the other day that with the variation in tempos and the colors of the song, some are kind of dark in nature, some are more uplifting, that we can play with just about anybody. For example' we're going out with IRON MAIDEN this year and at the end of the year with BLACK SABBATH. We can totally dirge it out and make the songs heavy to go out to play to the SABBATH crowd or ramp it up and make it fast and riffy for IRON MAIDEN, which is really cool."

Asked what he is most proud of as a musician — his guitar playing, his songwriting or his singing — Mustaine said: "Definitely not my singing. [laughs] That's not my strong part. I love the guitar playing part because every once in awhile you can do something and really blow people's minds. But I think the thing I'm probably the most proud of is just pushing the boundaries of songwriting in heavy metal. You know, people all have their opinions and people will listen to a song and say I suck and it's like, I don't suck. There's no way I suck. And trying to say something like that, like it's going to make me de-focus off of what my primary purpose in life is, like, 'Oh God, I'm going to quit now because you said I sucked'? Ain't going to happen. I love playing guitar but being able to put some riffs together and make them work and then when you're playing, especially when you're in a foreign country, and you see people whose mother tongue is not English, to watch them singing your lyrics, you've made a big difference in the world. And one of the greatest things out of all this is when someone comes up to you and says, 'Your song helped me get through a very dark period of my life.' When we're alone and we're struggling and we're going through that pain, that we all go through, whatever the cause is, to know that, sharing that victory over whatever you go through is going to help somebody else, man, that's a righteous feeling."