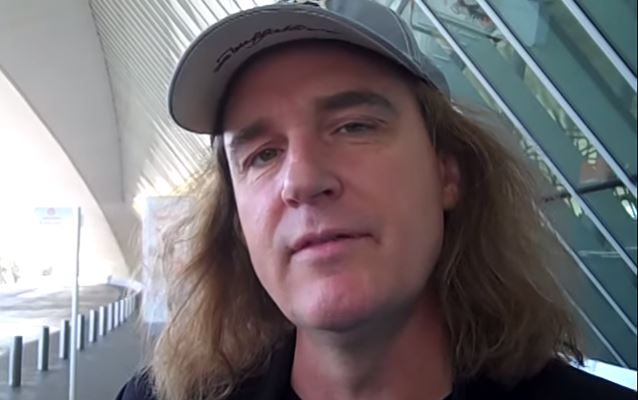 In a brand new interview with Australia's Reverb magazine, MEGADETH bassist David Ellefson was asked about drummer Chris Adler's (LAMB OF GOD) rumored involvement in the recording sessions for the band's new album, which is currently being tracked in Nashville, Tennessee.

"It's all speculation, isn't it?" Ellefson laughed. "There's nothing that I can report at this point, but things are definitely moving forward. There's a lot of excitement building. In fact, even this last week, [there's been] some huge corners turned. Things are very optimistic for our future. We are pretty much immediately getting to work and things are rolling forward."

He added: "It has been an interesting process, but now very optimistic. There have been a lot of new developments."

MEGADETH has yet to officially announce replacements for drummer Shawn Drover and guitarist Chris Broderick, who quit the group last year.

As BLABBERMOUTH.NET exclusively reported on March 14, MEGADETH is rumored to have hired Adler and Brazilian guitarist Kiko Loureiro (ANGRA) to play on the band's new CD.

MEGADETH mainman Dave Mustaine and Adler were photographed last week having a discussion at what appeared to be a fast-food restaurant or a coffee shop in Tennessee.

The band was still finalizing the recording lineup for its new album earlier in the month, with Mustaine tweeting on March 10 that he was "excited to be auditioning one of my final picks for my new guitarist today."