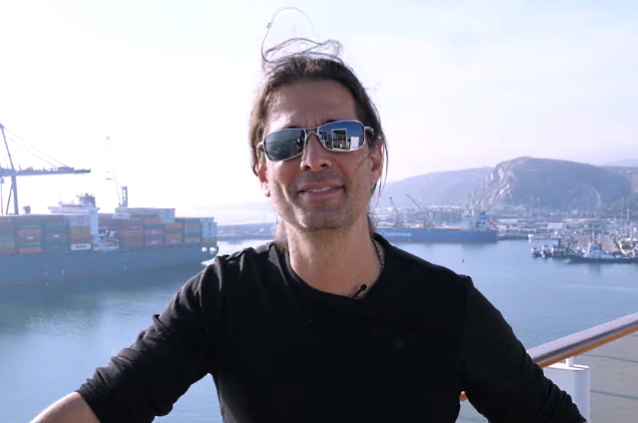 MEGADETH guitarist Kiko Loureiro spoke to Duke TV about the progress of the songwriting sessions for the band's new album. He said (see video below): "May, June [and] July, we stayed together in a house in Nashville to compose the new album. And then it creates a different kind of bond, because we're in the same house — kind of a 'Big Brother' kind of thing," referring to the TV show which follows a group of celebrities living in a house. "And then we had a lot of free time to talk, to talk about things in life, things we've been through."

According to Kiko, there is no set release date yet for MEGADETH's new album, particularly as frontman Dave Mustaine is still recovering from treatment for the throat cancer with which he was diagnosed this past spring.

"I think we're gonna wait for another two weeks for the results of his treatment, so we're gonna have a better idea when we can come back to the studio," the Brazilian musician said. "But, yeah, there's always pressure [when making a] new album — internal pressure. I mean, you cannot think much about it. [2016's] 'Dystopia' was very successful, so it's better not to think about it and just do your best."

Mustaine revealed his cancer diagnosis on June 17 on social media. He later issued an update, saying that his doctors "are feeling very positive" regarding the progress of his treatment.

Although most of MEGADETH's previously announced 2019 tour dates have been canceled as Mustaine battles the disease, the MEGADETH-curated Megacruise — which took place October 13-19 — still departed as scheduled, with Dave absent from the ship.

Kiko made his recording debut with MEGADETH on "Dystopia", whose title track was honored in the "Best Metal Performance" category at the 2017 Grammy Awards.