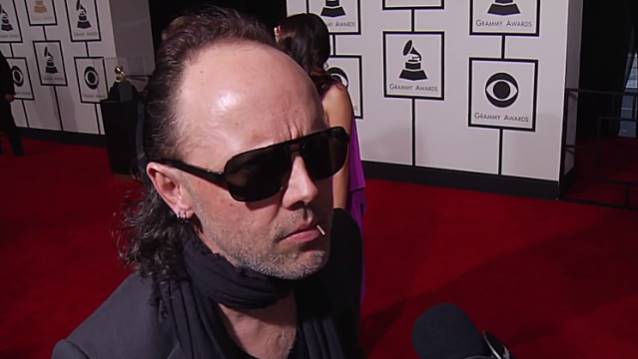 In a recent column in the UK's The Guardian, METALLICA drummer Lars Ulrich wrote about the "huge impact" English rock band OASIS has had on him throughout the years.

"OASIS has been the soundtrack to my life for the last 20 years on this wonderful planet," he said. "I have stories and pictures in my mind that go along with everything, from the first time I heard particular songs and read certain articles, to hearing about the band's shenanigans and festivities. And fortunately, I have enjoyed my fair share of crossing paths and sharing space with the fellas over the years. But most of those stories are probably best left for a night of tall tales, half truths and vivid imaginations. However, I will say that doing the lights for them at a club show in the spring of '95 at some God forsaken hole in the wall in Nowheresville, New Jersey, was a distinct highlight of my early encounters. They didn't have a crew guy to run the light board, and I was the only one in the building that knew the songs."

Back in July, Ulrich revealed in an interview with the UK's Mirror that he quit using cocaine 10 years ago with the help of ex-OASIS guitarist and good pal Noel Gallagher. Ulrich explained, "In the early days, I'd always get drunk way faster than the other guys. I realized that if there was a little bit of cocaine involved I could stay up longer, instead of ending up face down in the corner passed out three hours before the party ended. I loved the social elements of cocaine. I loved the danger of it. Then about 10 years ago, I read an interview with Noel Gallagher, in which he said, 'I just stopped doing cocaine.' I thought that was really cool: it felt so fresh, so honest, so pure — I love that side of him. I've never had an addictive personality, so I woke up one day and said: 'enough.'"

In a 2006 interview with Exclaim!, Gallagher stated about Ulrich: "Although he's a fookin' geezer and I do love him, he's a strange character. A strange, strange man."

Noel also recalled a time when Ulrich came to see OASIS perform live. "We tune our own guitars up because we're still capable of doing that — and he was like, [adopts perfect Ulrich accent] 'F-Fuck, you know, you know you guys should really fuckin' get one of your fuckin' road crew to tune your guitars. The fuckin' spaces in between the songs are too long," Noel said. "And it's just like, "Look man, I don't know if anyone's ever pointed this out to you before, but you're the fookin' drummer in METALLICA. Now you fookin' get on with that and leave the rest of it to us."

METALLICA is currently working on material for its tenth studio album, tentatively due in 2015.