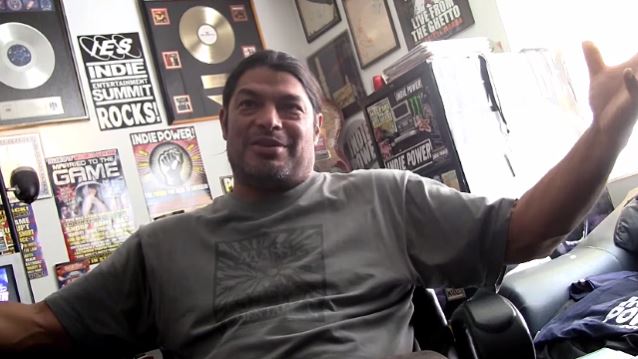 IndiePower.com recently conducted an interview with METALLICA bassist Robert Trujillo. You can now watch the chat in three parts below.

Asked how he has been able to deal with the various personalities in the different bands that he has played with over the years — a list that includes OZZY OSBOURNE, SUICIDAL TENDENCIES, INFECTIOUS GROOVES, Jerry Cantrell (ALICE IN CHAINS) and Zakk Wylde (BLACK LABEL SOCIETY, OZZY OSBOURNE) — Trujillo said: "That's interesting, because at a very young age, with my family situation and my dad, who I am still very tight with… But growing up, dad was... It was funny, 'cause in my situation with him, we always had a good relationship, [but] I was always very careful not to cross him. So in my band situations, I was always very careful how not to cross certain members. Because bandmembers can fly off the handle, especially in the situation that some of them were in, whether it was drug issues, drinking, whatever it was… There was a lot of stuff going down, and you had to be cool. Because, I mean, someone like Zakk, he would snap. He would kind of switch right in front of your eyes. So you always had to be careful with these people. And that's part of the journey, and I think with that, I adopted patience and respect. I learned how to deal with people and their personalities the best way that I can, and could, in these different situations."

Trujillo also spoke about how he has managed to avoid the pitfalls other successful rock musicians experienced in the past. He said: "I was fortunate to not get wrapped up too hard in anything that was too dangerous. Because it was all out there. In the late '80s and in the '90s, it was all happening. And, for some reason — maybe it was my mom or something — but I was able to kind of power my way through it, but still enjoy the music and the positive side of being creative with a lot of these wonderful musicians that I've been blessed [to play] with over the years."

Trujillo recently told LA Weekly that the documentary he's producing about the late, pioneering electric bass player Jaco Pastorius has already cost him a lot of money out of his own pocket. Trujillo revealed, "When you are trying to do it right, it's costly. I've been a part of this film for five years. I've spent a huge chunk of money. It's great because I feel it needs to be done, but I have [other] responsibilities, too."

Trujillo explained that just because he is a member of METALLICA, that doesn't give him access to unlimited funds, saying, "People don't understand. I didn't write [METALLICA's huge hit] 'Enter Sandman'. It's a little different for me."

The movie, titled "Jaco - A Documentary Film", tells the story of the electric bass pioneer through interviews with family, friends and fellow musicians such as Flea, Joni Mitchell, Sting, Wayne Shorter, Herbie Hancock, Geddy Lee, Bootsy Collins and Carlos Santana. Trujillo has been working on the project for nearly five years.