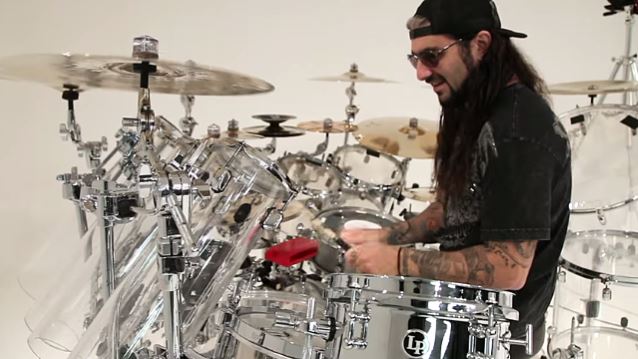 Drummer Mike Portnoy (THE WINERY DOGS, DREAM THEATER, AVENGED SEVENFOLD, ADRENALINE MOB) has launched his first full-on metal project. He writes on Facebook: "I just laid down the most brutal drum performance of my career! Picture 'Angel Of Death' [SLAYER] meets 'Dyers Eve' [METALLICA]… I FINALLY have my metal outlet!"

According to Mike, more information about his new metal project will be made available soon.

Portnoy is an avid heavy metal fan who told Drum! magazine several years ago that his first exposure to double-bass drumming came in the early 1980s. He said: "There's two tracks in particular that come to mind — one was the song 'Overkill' by MOTÖRHEAD and the other 'Fast As A Shark', by the band ACCEPT. I heard both of those tracks around 1982 and that was the was the first time that I ever heard relentless, nonstop double bass going from start to finish in a song. I was immediately intrigued. I went and bought a cheap second bass drum to add to my kit. But before I could get to the level of those two tracks, I had to start with the basic patterns, and the first guy that really taught me the basics was Tommy Lee on the first two MÖTLEY CRÜE albums. I would learn how to play songs like 'Red Hot' and that got me around the basics. Then a few years later the whole thrash metal scene exploded, and it was drummers like Lars Ulrich [METALLICA], Dave Lombardo [SLAYER] and Charlie Benante [ANTHRAX] that really showed me how double bass could be utilized in a metal genre."

In a 2013 interview with Tell magazine, Portnoy said: "There's a part of me that would love to do a thrash metal band project, because in everything I've done, I haven't really tapped into that world, which is also really a huge part of my background."

He continued: "I did these 'Metal Masters' gigs with the guys from ANTHRAX, SLAYER, MEGADETH and PANTERA — I got to tap into that world with that. I certainly would welcome, one of these days, doing a project for a band that's in that world as well."

Portnoy, who co-founded DREAM THEATER 30 years ago, abruptly quit the band in September 2010 while on tour with AVENGED SEVENFOLD. He has since been replaced by Mike Mangini (ANNIHILATOR, EXTREME, JAMES LABRIE, STEVE VAI). Portnoy later revealed that he tried to rejoin DREAM THEATER, only to be rebuffed.