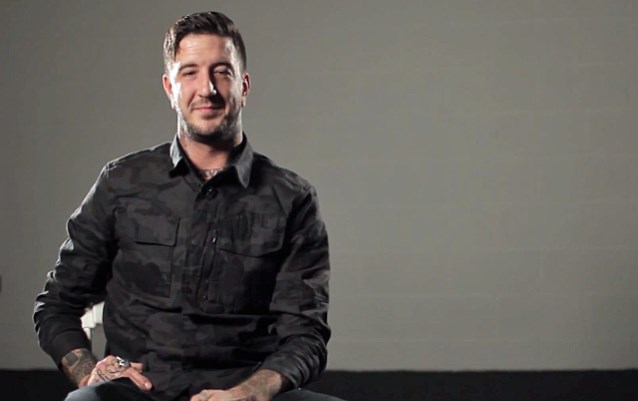 Vocalist Austin Carlile of the Orange County, California-based rock band OF MICE & MEN recently discusses the highlights of 2014 with UK's Metal Hammer magazine. Check out the clip below.

OF MICE & MEN has set a February 24, 2015 release date for "Restoring Force: Full Circle", a deluxe double-disc, foil-stamped digipack that includes three brand-new songs and an acoustic version of the band's hit single "Feels Like Forever".

The new songs — "Broken Generation", "Something To Hide", "Never Giving Up" and the acoustic version of "Feels Like Forever" — were recorded this past fall with producer David Bendeth (PARAMORE, BRING ME THE HORIZON) in Southern California.

The two-CD set is a special reissue of the album "Restoring Force", which hit No. 4 on The Billboard 200 chart and No. 1 on both the Billboard Top Independent and Top Rock Albums charts.

Following dates with LINKIN PARK, OF MICE & MEN will head to Australia for three dates on the Soundwave Festival, then return to Europe for a headlining tour that kicks off March 11 in Paris.

OF MICE & MEN recently teamed with USA Today for the video premiere of "Feels Like Forever", a clip that's amassed close to a million views. The stunning video was directed by Nathan William and filmed in Los Angeles.

Since the 2010 release of their self-titled debut, OF MICE & MEN have blanketed rock radio airwaves, garnered critical acclaim and amassed over 20 million YouTube views and close to 5 million social media followers on the strength of an electrifying sound and live show. The latter has seen them play to packed-house crowds on headlining tours around the world and key slots on top fests, including this year's Reading and Leeds festivals, where they were part of a star-studded lineup that included artists such as QUEENS OF THE STONE AGE, ARCTIC MONKEYS, MACKLEMORE and Ryan Lewis.