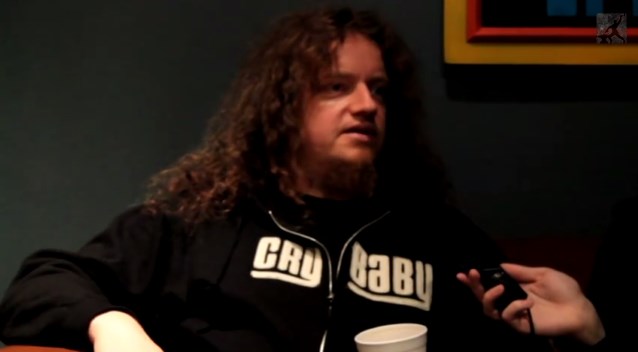 Rock Made Of Metal in October conducted an interview with guitarist Fredrik Åkesson of Swedish progressive metallers OPETH. You can now watch the chat below. A couple of excerpts follow (transcribed by BLABBERMOUTH.NET).

Fredrik: "It would have been strange, in a way, if we would have done a very metal album straight after 'Heritage'. I think this album goes a bit hand in hand [with the last one] even though it's different; 'Pale Communion' is different compared to ['Heritage']. And I know the fans are a bit divided; some people don't like that kind of [less heavy direction] and some [do]. But, I guess, a lot of people that listen to OPETH have a bit of an open mind; they can understand [why we wanted to do this]."

On the audience reactions to the new OPETH material at live concerts:

Fredrik: "I think it seems like they're really interested in listening to the new stuff as well. After we're done [playing], they seem really happy. They get their fair share of the older stuff, and we're not pushing the new stuff too much. For instance, when we did the first 'Heritage' tour, we decided [our setlist would contain] 'no songs with growls,' and a lot of people were, of course, disappointed with that. So we talked about it and we thought we maybe pushed it a little bit too far. Because it's one thing when it comes to recording stuff, but in the live [situation], we want people to go out from the place and be happy."

OPETH's eleventh studio album, "Pale Communion", sold around 13,000 copies in the United States in its first week of release to debut at position No. 19 on The Billboard 200 chart.

"Pale Communion" was released on August 26 via Roadrunner Records. The cover artwork was once again created by Travis Smith — with art direction by guitarist/vocalist Mikael Åkerfeldt. The CD was produced by Åkerfeldt and mixed by longtime collaborator and PORCUPINE TREE frontman/guitarist Steven Wilson.