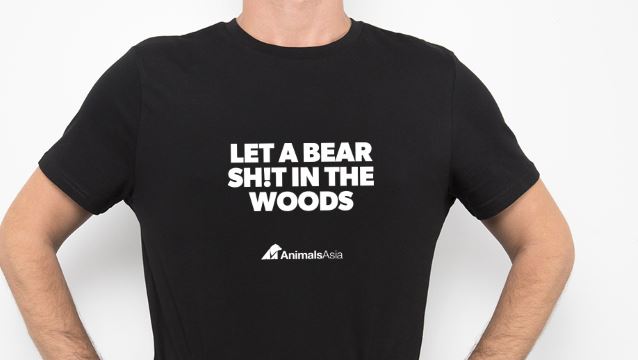 On May 13, artists, comedians and celebrities are coming together. Their goal: to let bears shit in the woods.

The famous faces feature in a brief tongue-in-cheek film and photo shoot, directed by former top model Shaina Danziger and shot by rock photographer Katarina Benzova, which will launch on May 13.

Over 10,000 bears are kept on bile farms in China, with over 1,200 suffering the same fate in Vietnam. The bears suffer regular bile extractions with the bile used in traditional medicine.

Bile is extracted using various painful, invasive techniques, all of which cause massive infection in the bears. This cruel practice continues despite the widespread availability of effective and affordable herbal and synthetic alternatives.

Farmed bears are kept in tiny cages, sometimes so small that the bears are unable to stand on all fours. Some bears are put into cages as cubs and never released. They may be kept caged like this for up to 30 years. Farmed bears are starved, dehydrated and suffer from multiple diseases and malignant tumours that ultimately kill them.