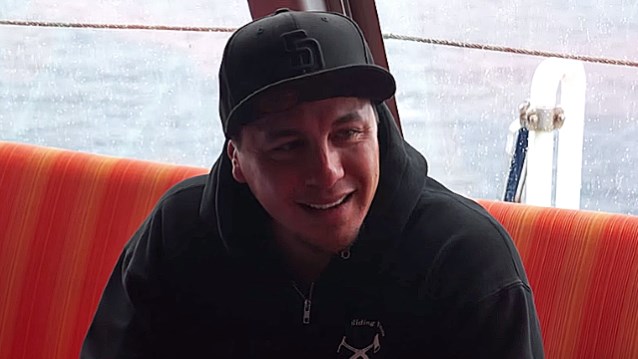 Christian hard rockers P.O.D. (PAYABLE ON DEATH) have entered a Los Angeles-area studio with longtime producer Howard Benson to begin recording their new album for a tentative summer release. P.O.D. frontman Sonny Sandoval told All Access Live during this year's ShipRocked cruise(see video below) that he hopes to be done tracking the new CD in "four to six weeks."

P.O.D.'s last release was "SoCal Sessions", a collection of acoustic versions of some of the band's most popular songs. The CD came out last November.

A digital re-release of a special deluxe edition of P.O.D.'s latest studio album, "Murdered Love", was made available in October 2013. Highlights included two previously unreleased studio tracks, "Burn It Down" and "Find A Way" (recorded with Benson) and an acoustic version of the band's Top 5 hit "Beautiful". Additional tracks include an acoustic version of "West Coast Rock Steady", an alternate version of "On Fire" and "Lost In Forever (Scream)", plus various music videos and behind-the-scenes footage from the "Murdered Love" album cycle.

"Murdered Love" saw P.O.D. reunited with Benson, who also produced the band's massive "Satellite" album as well as hit LPs for Kelly Clarkson, THEORY OF A DEADMAN, DAUGHTRY and MY CHEMICAL ROMANCE.