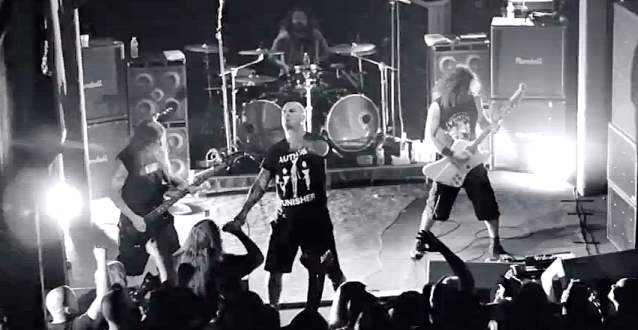 Multi-camera video footage of Philip Anselmo's (DOWN, PANTERA) August 22 performance at Tipitina's in New Orleans can be seen below.

2014 will mark the 20th anniversary of PANTERA's seventh album, "Far Beyond Driven", and the band is planning to re-release a special edition for fans.

According to The Pulse Of Radio, Anselmo chatted about the album with Artisan News saying, "Considering its contents, it is the heaviest record to come in at No. 1, and yes, there is a fucking goddamn re-release coming up. I don't know anything, really, about it other than, yes, it's gonna re-released with live footage from said show, but I can't name the show yet, because I think it's a fight between two different shows. And you never know. I'm trying to think of specialties or whatnot that will be included as well."

Anselmo went on to discuss the band's success saying, "The chemistry within PANTERA...In the early days, they were very guarded about what I said here and there. And then, finally, by 'Vulgar Display Of Power', it was, like, 'Just let me handle the lyrics.' And then by 'Far Beyond Driven', I was saying anything I fucking wanted to fucking really fucking sing about, man."

Anselmo's first-ever solo album, "Walk Through Exits Only", sold around 8,700 copies in the United States in its first week of release to debut at position No. 35 on The Billboard 200 chart.

Produced by Anselmo and Michael Thompson, and recorded over the past couple of years at Philip's New Orleans studio, Nodferatu's Lair, with his band THE ILLEGALS — guitarist Marzi Montazeri (ex-SUPERJOINT RITUAL) and José Manuel Gonzales — "Walk Through Exits Only" is abrasive, aggressive, anthemic and 100% Anselmo.