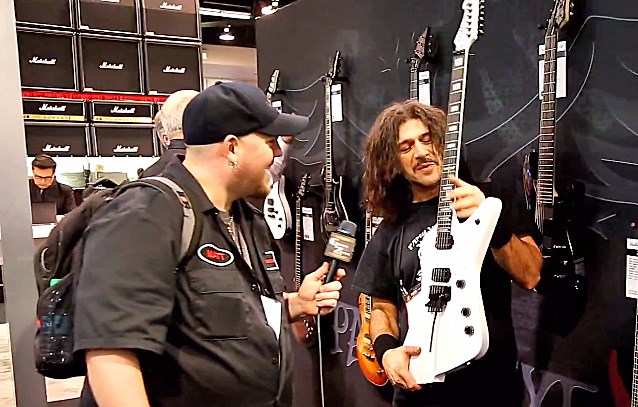 Maziar "Marzi" Montazeri of PHILIP H ANSELMO & THE ILLEGALS spoke to GearZombiee.com about his new signature Washburn guitar The Priestess at this year's NAMM show at the Anaheim Convention Center in Anaheim, California. Check out the footage below.

Washburn's Parallaxe series is a breakthrough line of guitars aimed at the pro rock or metal guitarist. It is stage- and recording-ready and packed with unique features such as the Buzz Feiten tuning system, spring silencers, brass trem blocks, super jumbo frets and USA-made electronics.

In an interview with the Minneapolis, Minnesota radio station 93X, Philip Anselmo stated about Marzi, "[He] and [late PANTERA guitarist] Dimebag had known each other since the middle '80s, late '80s, and I've known Marzi almost as long. And really, Dimebag… He was such a killer, killer, amazing player — we all know this — but Dimebag would show so much respect to Marzi. Just to sit there and watch those two guys jam together back in the old days, or just talk guitars… They just had this amazing mutual respect for one another. So Marzi and I have reunited, and he is really an executioner when it comes to right-hand picking, and his left hand blows mine away completely, and he's a great lead player. . . And really, man, I orchestrated the whole thing — my words, my songs — but I let Marzi put his fingerprints, so to speak, all over this whole damn thing."