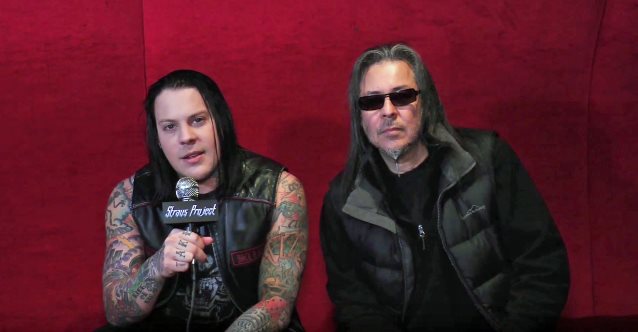 Straus Project recently conducted an interview with bassist Eddie Jackson and guitarist Parker Lundgren of QUEENSRŸCHE. You can now watch the chat below.

Asked if there are any songs that were left over from the writing sessions for 2015's "Condition Hüman" album that might be revisited for the band's next CD, Eddie said: "Yeah, we have some compositions that didn't make the last album. We're just gonna revisit those and see what happens. We're constantly writing, and we've been writing as we tour, and have come up with some ideas. So we'll revisit those songs when the time comes."

Parker and Eddie also talked in more detail about the QUEENSRŸCHE songwriting process. Parker said: "It's weird. It'd be kind of neat to put out a 'before' and 'after' just so people could see the songs in their demo stages versus how they end up on the record."

He continued: "When Eddie writes a song, by the time Michael [Wilton] and I rewrite the guitar parts, or maybe Todd [La Torre] changes some melodies, or Scott [Rockenfield] does his drum thing, it's gonna sound way different than the original demo. And that goes the same for me, and the same for everybody. So it's a total collaborative thing. And there's songs where I'm, like, 'Oh, this doesn't sound like a QUEENSRŸCHE song at all,' and then by the time it's all done, it's on the album and everything else, because of everybody's collaborative input."

Added Eddie: "We all have our own sort of different styles. But, like Parker was saying, he could approach us with a song idea, and it might not sound like something that… whether it's a QUEENSRŸCHE sound or not, but once everybody puts their own elements in it, it starts to create and shape into a more of a QUEENSRŸCHE song."

QUEENSRŸCHE is hoping to enter the studio sometime in the spring to begin recording the follow-up to "Condition Hüman" for a tentative fall 2017 release via Century Media. The effort will once again be helmed by producer Chris "Zeuss" Harris, who worked on "Condition Hüman".

QUEENSRŸCHE recently embarked on a month-long headlining tour of the United States. Support on the trek came from ARMORED SAINT and MIDNIGHT ETERNAL.