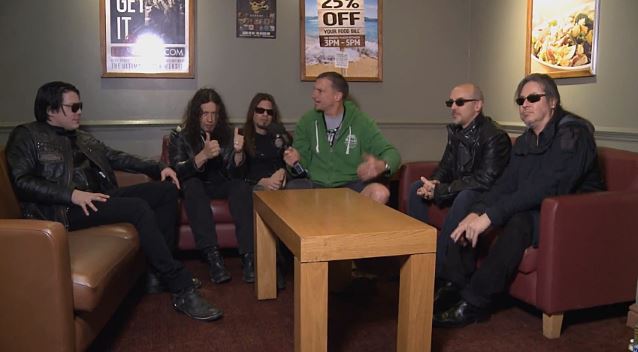 Speaking about the recently launched PledgeMusic campaign, "Building The Empire", for QUEENSRŸCHE's next album, Todd said: "The album is not crowdfunded, but we are doing preorders and have lots of awesome packages and bundles for the fans. And so it's kind of another way to engage with our fans, by offering unique, one-of-a-kind things."

Added Scott: "We've had such a great fan base through our career. I mean, over 30 years we've been making music, and we're always looking for ways to just, as Todd said, to engage and be a part of our fans as much as they are a part of what we do with the music. And the whole PledgeMusic thing, for us, is just another way for us to do that."

QUEENSRŸCHE is offering everything from limited-edition vinyl and merchandise to the actual instruments played on the upcoming album and a chance to hang with the band in their hometown of Seattle. In addition, the band is attempting to raise $2 million by selling stakes in what QUEENSRŸCHE securities attorney, Marc LoPresti, called a "new holding company for all things QUEENSRŸCHE" that will receive the revenues from its tours, merchandising, album sales and digital downloads.

For a minimum investment of $50,000, fans who pass an independent accreditation process can purchase an equity ownership stake from a private consolidated holding company that entitles them to "a fixed percentage" of future revenue.

QUEENSRŸCHE's stock deal utilizes a provision of the 2013 JOBS Act that allows promoters to publicize a private stock placement, though only "accredited investors" are eligible to invest.

An internal board of directors comprising Rockenfield, Jackson and Wilton and band counsel Thomas Osinski will oversee the corporation.

QUEENSRŸCHE's latest, self-titled album sold around 13,500 copies in the United States in its first week of release to land at position No. 23 on The Billboard 200 chart. The record arrived in stores on June 25, 2013 via Century Media Records.