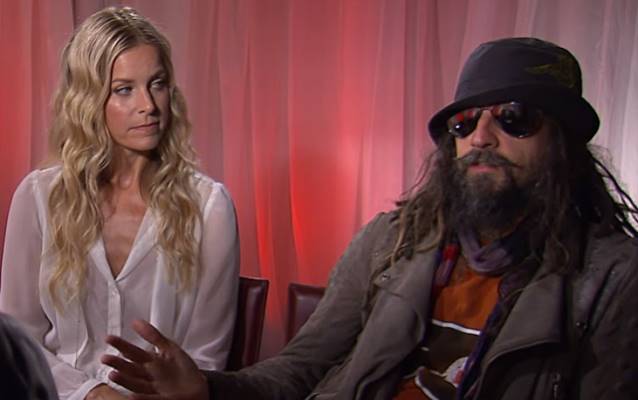 According to The Pulse Of Radio, Rob Zombie and wife Sheri Moon Zombie are selling their house in Woodbury, Connecticut, putting the nearly 4,700-square-foot, four-bedroom, four-bathroom mansion on the market for just under $2.3 million. The nine-room colonial residence, parts of which have been standing since the mid-1700s, features plank wood floors, exposed wood beams and a handful of fireplaces, along with a library, French doors, a stone-top center island kitchen, Amityville Horror-style quarter circle windows in the bedrooms, sun porches, a loft, landscaped gardens, a guest house, two barns, an in-ground swimming pool, a tennis court and acres of lawns and open space.

The house was the center of controversy last year when the Zombies allegedly complained about the noise emanating from a skate park that sat next to the 23-acre property. Rob told The Pulse Of Radio that the story got blown way out of proportion. "You know, I was wondering what that was all about at one point, 'cause I'm like, 'Why is this turning into such a big deal?'" he said. "I never even spoke to anyone about it, that's the funny thing. I never spoke to any press, I never spoke to any people, I never did anything. And then I realized, 'I know what this is. This is an election thing.' 'Cause soon after that, the guy who had started the whole thing ran for office, and it was his idea to get a lot of press — of which he did, but then he lost anyway."

The Zombies bought the Woodbury house, which is about 90 miles northwest of midtown Manhattan, in late 2008 for $1.9 million.

The couple also sold their 1924 mansion in the Hancock Park area of Los Angeles last January for $3.65 million.

Zombie is currently on a run of European festivals but will return to the States for a new round of summer shows beginning on July 17 at the Rock USA festival in Oshkosh, Wisconsin.