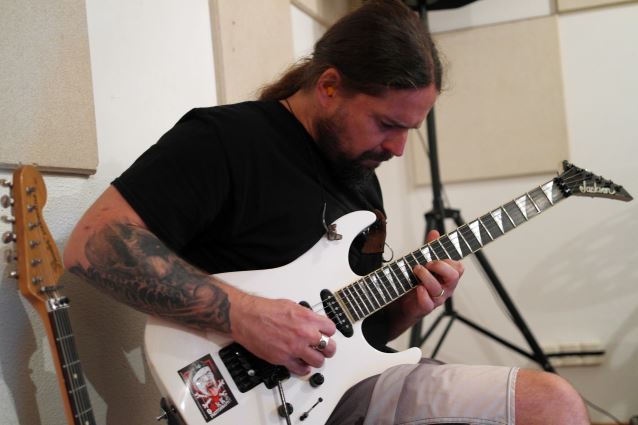 Brazilian/American metallers SEPULTURA have commenced the songwriting process for the follow-up to their 2013 album, "The Mediator Between Head And Hands Must Be The Heart", tentatively due before the end of the year via Nuclear Blast.

A few photos from the latest writing sessions can be seen below.

SEPULTURA released a limited-edition seven-inch single to mark its 30th anniversary. "Under My Skin" features artwork of fan tattoos on its cover, with a live version of "Kairos" on the b-side. The single was issued on black, yellow and green vinyl, with only 200 copies of each version pressed.

"The Mediator Between Head And Hands Must Be The Heart" came out on October 29, 2013 via Nuclear Blast.

SEPULTURA guitarist Andreas Kisser told Metal Wani about the group's last CD: "I think we have two factors on this last album, which are very important. I mean, [producer] Ross [Robinson] is one of them, for sure. And the other one is our new drummer [Eloy Casagrande], [who's been] four years with us already. And he really brought some new possibilities for our music. He's an amazing musician; he can play basically anything. [His playing style is] very metal, very powerful, very much with that urge to break limits. So the consequence was 'Mediator' — songs that were really… that stretch our possibilities as musicians, which was great for me, Paulo [Xisto Pinto Jr., bass] and Derrick [Green, vocals], to have that kind of push and motivation to do something extra and something new, and really to take SEPULTURA to a different level. And Ross [who previously worked with SEPULTURA on 1996's 'Roots'] really enhanced everything, especially with Derrick's singing and the performance. It was great. I mean, of course, it was different times and different ideas than 'Roots' and stuff, but we have that kind of communication of friends. I mean, we know each other, and we respect each other so much. It was the perfect choice; we're very happy with everything."

February has been really special. Besides the celebration of the 20th anniversary of Roots, we started writing another...

Posted by Sepultura on Wednesday, February 24, 2016