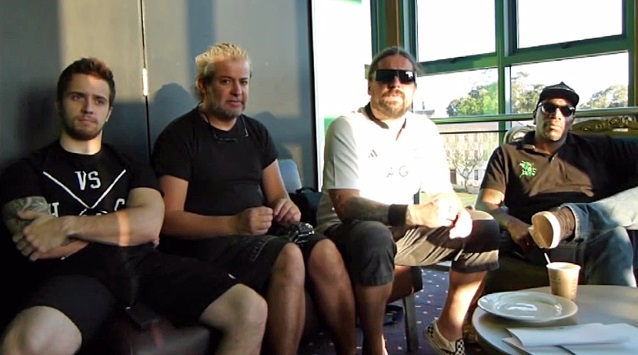 H-Hour Chronicles conducted an interview with Brazilian/American metallers SEPULTURA when they played on October 5 at The Manning Bar in Sydney, Australia. You can now watch the chat below.

Speaking about SEPULTURA's plans for the coming months, guitarist Andreas Kisser said: "We're celebrating 30 years of history in 2014. We are a year [into the] touring [cycle] for our last album, 'The Mediator Between Head And Hands Must Be The Heart'. We still have another year ahead of us for touring for this album. We just released a live DVD shot in Rock In Rio festival in Rio De Janeiro, Brazil in 2013. It's a DVD that we shot together with a percussive group from France, LES TAMBOURS DU BRONX, [where] we did new versions of SEPULTURA [songs] with them. Also that will open new possibilities for next year for festivals and stuff. But the idea is, really, to keep on the road. We are preparing, also, a documentary about the history of the band that, hopefully, will be ready next year for release, to celebrate this special date. And just keep enjoying ourselves. We're still here doing what we love. It's a privilege to be a part of a band like SEPULTURA that goes everywhere. No prejudice anywhere. Just having fun and enjoying ourselves. So it's great. So what's next? Maybe another 30 years, hopefully. Let's see."

"Metal Veins - Alive At Rock In Rio" is available on CD, DVD and for the first time in the band's history, Blu-ray via a partnership with Rock In Rio, MZA Music and Eagle Rock Entertainment. In addition, the DVD includes an exclusive documentary of behind-the-scenes preparation with interviews, rehearsal and soundcheck footage and clips of the band just seconds before they hit the stage.

SEPULTURA's new album, "The Mediator Between Head And Hands Must Be The Heart", sold around 1,800 copies in the United States in its first week of release. The CD came out on October 29, 2013 via Nuclear Blast Records.