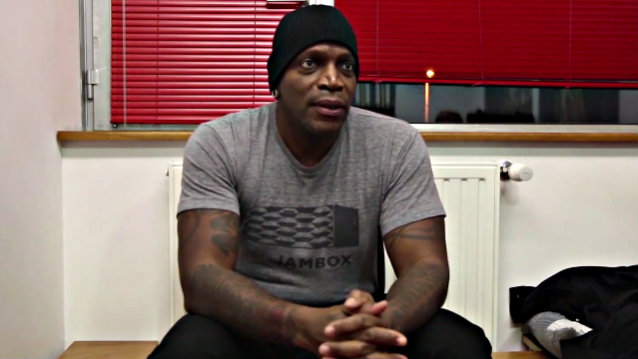 Thorium magazine conducted an interview with vocalist Derrick Green of Brazilian/American metallers SEPULTURA before the band's February 25 at Le Bikini in Toulouse, France. You can now watch the chat below.

SEPULTURA's new album, "The Mediator Between Head And Hands Must Be The Heart", sold around 1,800 copies in the United States in its first week of release. The CD came out on October 29, 2013 via Nuclear Blast Records.

Although it was inspired by Fritz Lang's classic 1927 movie "Metropolis", "The Mediator Between Head And Hands Must Be The Heart" is not a concept album or a soundtrack like its precedessors "Dante XXI" (based on "The Divine Comedy") and "A-Lex" (based on "A Clockwork Orange").

"The Mediator Between The Head And Hands Must Be The Heart" was tracked over a 40-day period at producer Ross Robinson's (KORN, LIMP BIZKIT, SLIPKNOT) studio in Venice, California and was mixed and mastered by co-producer Steve Evetts, who previously worked with SEPULTURA on the "Nation" (2001), "Revolusongs" (2002) and "Roorback" (2003) albums, in addition to having collaborated with Ross on a number of other projects in the past.

In a 2013 interview with Live-Metal.net, SEPULTURA singer Derrick Green stated about the new album title: "We always have the simple one-word titles or very basic. And with this we knew what we wanted to do. We wanted to maybe make people think a little bit.

"I think we have become lobotomized, including myself, because I'm not putting myself outside of anything. I think a lot of times we live in a time where people are thinking actions or creating ideas — doing something in their head but going right to their hands. And they're missing the essential part, the heart and the compassion, that's behind what you are doing. And (the title) came from a movie called 'Metropolis' (1927) by a director called Fritz Lang, and it's a silent movie. And it's actually the first thing you see in the movie. And the meaning behind it is just that: It's impossible to be human without having the heart dictate what you're doing and why you're doing certain things.

"So I believe this album has that passion and drive and love for music.

"So many things I've been hearing are just about trying to be perfect, with the digital age and trying to make everything sound perfect. Like on albums and things like that, it doesn't even sound real. It doesn't sound human anymore. So this is something going back to really trying not to be perfect. We're trying to pull out that love and desire and just grabbing that moment, placing it on an album and recording it, and not being worried about those other things."