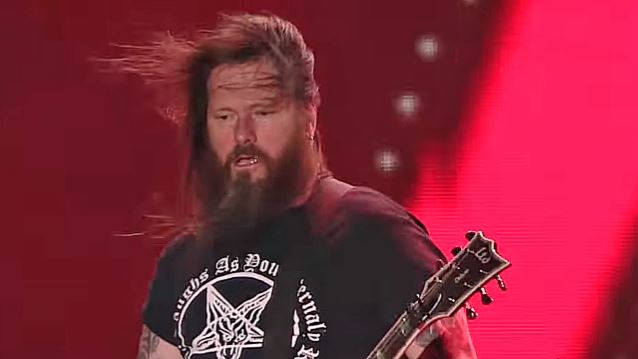 In a brand new interview with INDY Week, SLAYER and EXODUS guitarist Gary Holt was asked how he has been received by SLAYER fans as the replacement for the late Jeff Hanneman. He responded: "I've been here long enough — five years-plus — to where I'm pretty much well accepted now. In five-plus years, I think I've had a grand total of four hecklers in countless shows. The odds have been in my favor as far as acceptance, originally in the absence of Jeff and then after the tragic loss of Jeff. I think the acceptance stems from the fact that I am one of the insiders, I guess you would say. I've been friends with this band, Jeff included, for decades, since the infancy of thrash metal. I'm one of the originators of it, so I've got old-school street cred. It's difficult being in two bands — I can't always be in the same place at the same time. But I've been made to feel like family here since day on. As far as the band members, we are family, going back to the early eighties."

Holt spoke in more detail about the exchange he had with the hecklers. He said : "With most of them, it was fun; we were bantering back and forth. With one, on the first Mayhem tour, at the end of the set, this kid goes, 'I just miss Jeff, man,' and I said, 'I miss Jeff, too.' I had one on my first European tour — this guy with this awful skullet, flipping me off the whole time. Little did he know that all I had to do was say something to have him beaten senseless by the SLAYER road crew of thugs, but I didn't. He did see our production manager looking at him on the radio, and he vanished. He kept flipping me off and tapping on his SLAYER shirt. I mean, you knew Jeff wasn't here, and you bought a ticket, anyway. That kind of shit just never made sense to me."

He continued: "I had a guy in Milan of all places — which is a very good home to EXODUS as well — who was kind of a dick. But I got in his face the whole time. I'm not gonna back down to anyone because they're out trying to ruin my show. By ruining my show, they're by extension trying to ruin SLAYER's set, because they're trying to take down one-fourth of the band. I went right up and stood on the subwoofers and grabbed him by his hand. I got right in his face to see how much he had to say when I was within striking distance. He had nothing to say. He didn't expect that, that I would step off the stage, hop a few feet over on to the subwoofer, to where I was directly in his face. The last thing I wanna do is break my hand on some dude's head. I'm a thick-skinned guy, and that shit doesn't mean anything to me. But I am going to give as well as I take, that's for sure."

According to Holt, the age of the Internet has given power to the cowards who hide behind their keyboards and blast away — something that didn't exist when he was growing up. "I look back at when I was a kid, long before the Internet, the late, great, legendary Bon Scott died, and I guarantee not one soul in the crowd was flipping off Brian Johnson," he said. "I was there waiting in line to buy 'Back In Black' the day it came out, because I'm old enough to remember record stores. I went both nights, and I was completely stoked. There was not a negative vibe in the audience, but the Internet just breeds that. You get keyboard warriors. Then you'll see one guy post something like, 'All right, my metal brothers and sisters, we gotta stick together.' Now, that doesn't happen. It's so segregated. When I was a kid, I liked all kinds of metal. The Internet breeds all kinds of idiots, but it is great for spreading the word of new bands. You got an instant worldwide outlet for spreading music."

Holt, who is still a member of San Francisco Bay Area thrash icons EXODUS, has been the touring guitarist for SLAYER since January 2011 when Jeff Hanneman contracted necrotizing fasciitis, also known as flesh-eating disease, from a spider bite in his backyard. The infection ravaged the flesh and tissues of Hanneman's arm, leading to numerous surgeries, skin grafts and intense periods of rehab that forced him into semi-retirement and left him near death at several points.

Holt did not contribute to the songwriting process on SLAYER's latest album, "Repentless", although he did lay down guitar solos on most of the album's twelve tracks.

Hanneman eventually died in May 2013 from alcohol-related cirrhosis of the liver. He is credited for writing many of SLAYER's classic songs, including "Angel Of Death" and "South Of Heaven".

Hanneman's last appearance with SLAYER was in April 2011, when he played an encore with the band at the "Big Four" concert in Indio, California.